The wall combustion is one of the soot and unburned hydrocarbon formation sources in the engine cylinders, which is affected by both spray and wall parameters. The impingement dynamics of the droplets on liquid films have been widely studied. However, there is less focus on the droplet impingements on hot liquid film, which is more representative as a pre-wall combustion condition. This work investigates the impingement dynamics of ethanol on heated glycerol liquid film. The Weber number (10 ≤ We ≤ 275) and liquid film temperature (70°C ≤ T ≤ 175°C) are two main parameters that lead to a comprehensive understanding of impinging phenomena. In the experiment, a high-speed camera was used to visualize the droplets impingement behaviors, which could be classified to six categories: deposition-spreading, rebounding-sputtering, rebounding-floating, stable crown-spreading, stable crown-sputtering, and splash crown-sputtering. The critical temperature for sputtering is about 125°C, independent of the We. The dynamic phenomena were quantified by the diameter and height of the crown, sputtering time and droplet size distribution. The dimensionless diameter, dimensionless height, and maintenance time of the crown all increase with the increasing We or temperature. When the We is greater than 172, the dimensionless diameter increases less. The relationship between the maximum dimensionless height of the crown and the We is H*max = 0.0026 We. The change of the crown diameter with time is independent from the temperature. Additionally, the sputtering time decreases with the increasing We and temperature. For the diameter distribution of sputtering droplets, the fractions of the larger sputtering droplets increased at low We, while the smaller droplets increased their contributions at high We. With the increase of temperature, the proportion of small diameter sputtering droplets increases. 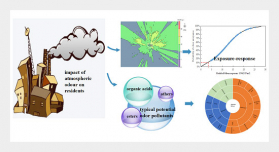