An expanded PMF model, first described and detailed by Paatero and Hopke (2002), included parametric variables through an additional equation that can be expressed using the most basic form as (Paatero and Hopke, 2002; Kim et al., 2003b; Begum et al., 2005):

where D represents the WD matrix and V is the WS matrix. δi and νi are index parameters obtained from the classification of the wind data. Previous studies demonstrated the benefits of utilizing wind and time variables in the expanded PMF modeling, e.g., a diesel factor can be separated from vehicle exhaust due to reduced rotational ambiguity (Kim et al., 2003b; Begum et al., 2005). Rotational ambiguity, which results from rotation of the factor matrices and could lead to infinite solutions in PMF modeling, can be expressed as (Paatero et al., 2002; Norris et al., 2009; Paatero and Hopke, 2009):

Conceptually, additional environmental characteristics, apart from the wind data, also can be considered in the expanded PMF modeling. For example, photochemical strength and relative humidity (RH) could play important roles in the formation process of secondary aerosol and serve as the parametric variables.

To address above issues and to better understand the sources of secondary aerosol, in this Technical Note we attempted to evaluate the effects of applying an expanded PMF model with bihourly speciation data. Parametric variables, including WS, photochemical strength and RH, were imposed to selected factors involving secondary formation features.

An intensive field campaign was conducted in Zhushan (23.76°N, 120.68°E), a hillside township located in central Taiwan, in late autumn (27 October–6 November) of 2018. Zhushan is in a rural area with few industrial sources and low road traffic intensity. Nonetheless, PM2.5 mass concentrations in Zhushan were comparable with those in the urban area (Tsai et al., 2016). This phenomenon is partially explained by the fact that particles can be transported from upwind urban area by sea breezes during daytime (Tsai et al., 2008; Tsai et al., 2016). The sampling site was set up in the downtown area of Zhushan township. The northwest and north-northeast winds were most predominant during the study period. Hourly measurements (mean ± SD) of wind speed, temperature, and relative humidity were 0.98 ± 0.59 m s−1, 23.0 ± 3.3°C, and 77.8 ± 14.0%, respectively.

Bihourly PM2.5 samples were collected on 150 mm Whatman cellulose filters using high-volume samplers (HVS, DHA-80, DIGITEL) at a flow rate of 500 LPM for the measurement of elements and water‐soluble ions. Elemental compositions were analyzed using an inductively coupled plasma mass spectrophotometer (ICP-MS, NexION 300X, Perkin Elmer). Water-soluble ions were quantified by ion chromatography (IC, Dionex ICS 1000, Thermo Scientific). Cellulose and Teflon filters are preferred for analysis of inorganic species, especially trace elements, because of their low backgrounds (Upadhyay et al., 2009). The advantage of using cellulose filters is that they can be completely acid-digested and have high recoveries of trace metals in the ICP-MS analysis (Pekney and Davidson, 2005; Upadhyay et al., 2009).

Typically, secondary inorganic aerosol (SIA) can be estimated as the summation of ammonium, nitrate and sulfate ions, which represents the reactions of ammonia (NH3) with nitric acid (HNO3 from NO2) and sulfuric acid (H2SO4 from SO2) (Behera and Sharma, 2011; Huang et al., 2016). Secondary organic aerosol (SOA) is thought to be formed through photochemical reactions of volatile organic compounds (VOCs), followed by nucleation and/or condensation, and cannot yet be directly measured (Ervens et al., 2011; Al-Naiema et al., 2018; Belis et al., 2019). In order to determine secondary organic contributions to PM2.5, primary and secondary OM (POM and SOM) were calculated using Eq. (6) (Turpin and Huntzicker, 1995; Chou et al., 2010; Wu and Yu, 2016):

In addition to the particulate data, hourly measurements of gaseous pollutants (i.e., SO2, NO, NO2, O3 and CO) and meteorological parameters, including WD, WS, temperature and RH, were acquired from the Zhushan Air Quality Monitoring Station (Zhushan AQMS) of the Taiwan Environmental Protection Administration (TEPA). Odd oxygen (Ox), calculated as [O3] + [NO2], was utilized to represent the photochemical strength (Wood et al., 2010; Li et al., 2018).

The script-based Multilinear Engine (ME-2) program that allowed modifying and implementing additional equations was used to execute the expanded PMF modeling. In this study, Eq. (4) is modified to incorporate hourly parametric variables, including WS, RH and Ox, as follows:

where V, R and O represent the WS, RH and Ox matrices. The classifications of the parametric data were defined to give approximately equivalent sample sizes across the intervals of each index parameter (ν, ρ and ο). During the study period, more than half of the WS measurements were smaller than 1 m s–1, which could result in unreliable WD data (Kim et al., 2003b; Buset et al., 2006). Therefore, WD was not incorporated in this study. The expanded PMF modeling was conducted through a 2-step run. The base run retrieved source contribution estimates (gik) and source factors (fkj) using the ordinary bilinear equations as Eq. (2). The expanded run applied additional equations as Eq. (7) to selected factors involving secondary formation features. The objective function Q was re-defined accordingly through adding an expanded term:

In addition to the observed data, measurement uncertainties were required as the model input. The uncertainty for each observation was calculated as (Liao et al., 2017b):

where MDLj denotes the method detection limit (MDL) of species j. Each concentration value below the MDL was replaced by MDL/2 with its uncertainty set to (5/6) × MDL. Additionally, only species having more than 30% of detectable values were included in the PMF modeling. Although the matrices, V, R and O, in Eq. (7) contained factor elements to be estimated, the chemical mass balance equation [Eq. (2)] should be more dominant in the fitting process. Therefore, the expanded equations were assigned greater uncertainties [u’ij in Eq. (8)] than the corresponding measurement uncertainties (Paatero and Hopke, 2002).

The final model input is a matrix with 116 rows (bihourly concentration data) and 28 columns (PM2.5 and its species) after screening invalid data. Table 1 shows the distribution of concentrations of each species included in the PMF modeling. Ammonium ion, nitrate ion, sulfate ion, POM and SOM were the major constituents (> 12% for each) of PM2.5. These components, except for POM, are regarded as secondary aerosol and accounted for over 60% of PM2.5 mass. After a sequence of model runs with different number of factors, an 8‐factor solution (Fig. 1) seemed most reasonable, having a high correlation (0.87) between observed/predicted PM2.5 mass and well model fitting (> 0.68) for all species (Kuo et al., 2014; Liao et al., 2017a). The constituents of secondary aerosol (i.e., sulfate ion, nitrate ion, ammonium ion and SOM) were partially attributed to primary sources, e.g., the profile of biomass burning contained a small fraction of these components. Nevertheless, a large proportion of them was differentiated into three factors (Factor03, Factor04 and Factor08) that showed non-specific source characteristics. To better understand the sources of secondary aerosol, the above‐mentioned three factors were chosen as the target factors in expanded PMF modeling.

As shown in Fig. 2, both Factor03 and Factor04 showed higher contribution estimates during daytime but with different diurnal patterns. Factor03 exhibited a peak maximum in the early afternoon (12–14 local time), whereas Factor04 had highest contribution in the late morning (10–12 local time). On the other hand, Factor08 showed higher contribution estimates during nighttime. Difference in diurnal patterns indicated different formation mechanisms or source origins among these three factors. Expanded model results for these secondary factors are shown in Fig. 3. Factor03 was not correlated with wind speed but showed obvious trends with increasing photochemical strength and reducing humidity. It might indicate that Factor03 was involved with locally accumulated secondary aerosol formation from photochemical reaction. In contrast, Factor08 was not well correlated with Ox or RH but demonstrated an apparent drop as WS increased, indicating that Factor08 could be associated with condensation of VOCs under low wind speed conditions during nighttime. Saffari et al. (2016) revealed that the nighttime SOC/OC ratio was increased at RH above 70%, indicating enhanced aqueous phase formation of SOC. It may partially explain the decrease of contribution of Factor08 at RH < 69%. Factor04 exhibited slightly increasing trends with increasing WS, escalating Ox and reducing RH, suggesting that Factor04 might involve with photochemical reaction and transportation of secondary aerosol originated from more distant areas. Fig. 2. Diurnal patterns of source contributions for the secondary sources. Average source contribution estimates to PM2.5 mass during the campaign period are shown in Fig. 4. The greatest contributor was SOM‐rich secondary aerosol (Factor08, 24%), followed by biomass burning (Factor05, 19%) and nitrate‐rich secondary aerosol (Factor04, 18%). Contributions from three factors involving secondary formation features (Factor03, Factor04 and Factor08) accounted for 55% of PM2.5 mass, which could have a considerable impact on air quality at the Zhushan area. In addition to photo-oxidation formation, condensation and aqueous phase oxidation of VOCs and transport of secondary nitrates could be important PM2.5 sources during the campaign period. On the other hand, previous studies also indicated biomass burning as an important source in central Taiwan partially due to the intense burning activities in the harvest season (Yang et al., 2006; Cheng et al., 2009; Liao et al., 2015; Tsai et al., 2016; Lee et al., 2019). It should be noted that although several previous studies have revealed better results in the expanded PMF modeling (Kim et al., 2003b; Begum et al., 2005; Buset et al., 2006), no improvement was found than the normal PMF analysis in other researches, e.g., Zhou et al. (2009). Thus, multiple models should be explored to ensure that the most reliable solution has been obtained. Another limitation of this study is that the intensive 10‐day field campaign was unable to assess long‐term exposure to PM2.5 in the study area. In addition, time variables such as season and weekend effects were not considered in this study due to the same issue. Nonetheless, this study exhibited the benefits of application of expanded PMF modeling with parametric variables in improving characterization of the formation mechanisms and potential sources of secondary aerosol. Further investigation of SOA tracers would be beneficial in identifying the source origins of VOCs that are associated with SOA formation.

In this study an expanded PMF modeling approach was applied to bihourly PM2.5 speciation data. Results indicated that SOM‐rich secondary aerosol contributed the most (24%) among the eight apportioned factors. Through the enhanced modeling approach, this factor could be associated with condensation and aqueous phase oxidation of VOCs, suggesting the need for further investigation of SOA tracers. The second largest contributor (biomass burning, 19%) might be abated through regulating open field burning activities. The third largest factor (nitrate‐rich secondary aerosol, 18%) was characterized to be more likely the transport of secondary nitrates from upwind metropolitan area during the campaign period. Cooperation between neighboring cities would be more cost-effective in reducing its contribution to PM air pollution.

The authors declare that there are no conflicts of interest. 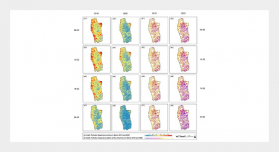 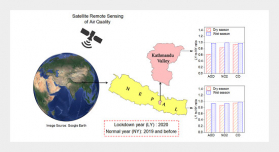