Special Session on Better Air Quality in Asia (I) Bacterial contamination of air may have human health implications by the transmission of potential human pathogens. Therefore, assessment of air bacterial abundance and composition in different built environment is essential. Jawaharlal Nehru University health centre (UHC) is a primary healthcare setting providing need-based medication to university students. Using active air sampling method, we collected eight air samples from the indoor and outdoor area of UHC across four different seasons. The total genomic DNA was extracted from the air samples and subjected to 16S rRNA gene-based next-generation sequencing. We performed the taxonomic classification along with comparative analysis of air bacterial communities. This study revealed that Proteobacteria, Actinobacteria, Bacteroidetes and Firmicutes are the dominant phyla in the sampled air. Overall, the air bacterial composition in our studied samples was comparatively simple; only ten taxonomic families accounting for ~75% of the total sequences determined. We also observed ESKAPE pathogens in the air metagenomes in a low percentage (4.42%), which were dominated by Pseudomonas, Acinetobacter and Staphylococcus. Proteobacteria, Actinobacteria and Firmicutes showed significant correlation with PM2.5. We suggest that routine air monitoring and microbiological survey is essential for air quality standards and potential human pathogens detection in health care settings. It is the first report from India to uncover the temporal dynamics of air bacterial communities in UHC using Illumina MiSeq (PE300) sequencing and Quantitative Insights into Microbial Ecology (QIIME).

University Health Centre (UHC) provides primary health care services to university students and residents of the university campus of Jawaharlal Nehru University (JNU). During unhealthy conditions, people visit UHC to get various medical facilities like consultation and lab investigation. The UHC microenvironment may possess aerosolised microorganisms which may have a potential health impact on patients as well as healthcare personnel. Therefore, the study of airborne bacterial diversity has a significant effect on public health assessment and infection control measures (Lax and Gilbert, 2015). The most-reported microorganisms involved in nosocomial infections are Enterococcus faecium, Staphylococcus aureus, Klebsiella pneumoniae, Acinetobacter baumannii, Pseudomonas aeruginosa, and Enterobacter species (ESKAPE pathogens) and most of them showed multidrug resistance (Santajit and Indrawattana, 2016).

As in the Indian scenario, no data are available to study the air bacterial communities in health care setting using advanced 16S rRNA gene-based Illumina MiSeq sequencing, we have attempted to characterise the air bacterial communities from the indoor and outdoor area of the UHC using the same. For this purpose, air samples were collected using microbial air sampler during four different seasons, spring, monsoon, winter and summer. Next, the abundance and composition of bacterial communities present in the collected air samples were estimated. Further to gain knowledge on air bacterial diversity, α- and β-diversity was estimated. The abundance and composition of aerosolised nosocomial pathogens with special focus to ESKAPE pathogens were also investigated. Finally, correlations between the dominant phyla and the environmental factors (Temperature, Relative Humidity, PM2.5 and PM10) were analysed.

We have collected the air samples in 12 ml of sterile collection liquid (PBS buffer, pH 7.4) using the microbial air sampler (Coriolis micro air sampler, Bertin Technologies, France) at an average flow rate of 300 L min–1 for two hours and for each sampling, 12 runs of 10 mins each with a one-minute pause for refilling the collection cone was performed. All the sampler fittings were sterilised before sample collection to avoid potential contamination. After collection, the samples were maintained at 4°C and transported to the laboratory within an hour. The longer sampling time and high flow rate of the sampler combined with Illumina MiSeq sequencing could minimise the effect of single air sampling per season on our determination of bacterial abundance and community composition because air is continuously moving.

The collected air samples (now hydrosol) were concentrated by centrifugation at 12000 × g for 60 mins at 4°C (Jiang et al., 2015) and the resulting pellet was resuspended in 4 mL of PBS buffer (pH 7.4). The genomic DNA was extracted using a DNAeasy PowerLyzer kit as per the manufacturers’ protocol (Qiagen, India). The concentration and quality of extracted DNA were measured by NanoDrop Spectrophotometer ND-2000c (Thermo Fischer Scientific, USA).

Trimmomatic v0.38 (Bolger et al., 2014) and FLASH (v1.2.11) (Magoč and Salzberg, 2011) were used to obtain the high-quality clean-reads and stitched the PE data into single reads based on the overlap. The merged sequences after removing adapter sequences, ambiguous reads and low-quality sequences were defined as ‘trimmed sequences’, which were filtered out the chimaeras using the UPARSE (Edgar, 2013).

We used the Quantitative Insights into Microbial Ecology (QIIME) pipeline for post-sequencing analysis (Caporaso et al., 2010). We have picked Operational Taxonomic Units (OTUs) based on 97% sequence similarity within reads and chose a representative sequence from each OTU against the Greengenes database (v13_8) (McDonald et al., 2012) for downstream analysis. This representative sequence was used for taxonomic identification of the OTU. OTU table was generated having representative sequences of OTUs with corresponding taxonomic ranks assigned against Greengenes database. We used alpha_diversity.py and alpha_rarefaction.py workflow script to calculate the alpha diversity (Shannon, Simpson and Chao1) and generate rarefaction curves, respectively. The QIIME script beta_diversity_through_ plots.py was used to calculate the beta diversity to compare the different bacterial communities, which could be illustrated as the PCoA plots using weighted UniFrac diversity metrics (Lozupone and Knight, 2005). We have also calculated the Spearman’s rank correlation coefficient (SRCC), ρ, between the different bacterial phyla and the environmental factors (Temperature, Relative Humidity, PM2.5 and PM10). 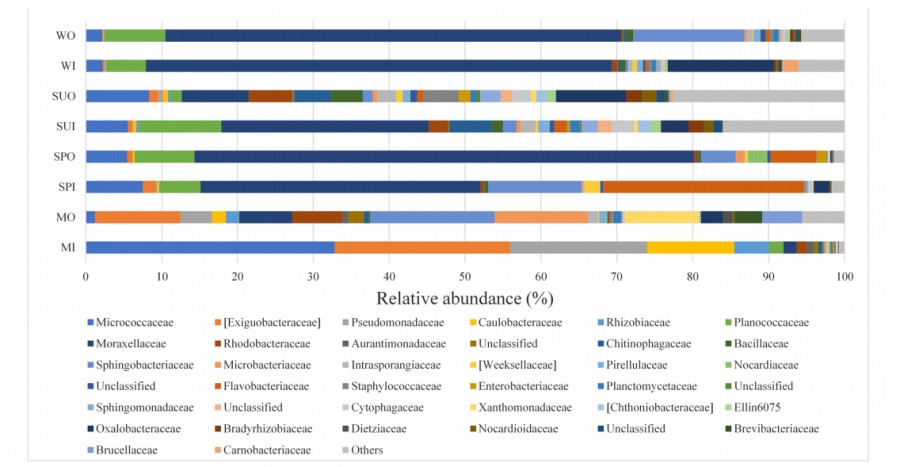 The 52 dominant genera (> 1% abundance at least one sample) were selected from a total of 750 genera, as shown in Fig. 5. Psychrobacter, Moraxellaceae unclassified and Arthrobacter showed higher abundance with an average abundance of 24.66%, 7.69%, 6.40%, respectively. Psychrobacter was the most abundant genera in all samples except MI, MO and SUO. The genus Psychrobacter, a member of the family Moraxellaceae, is a widespread and evolutionarily successful bacterial group, the biology of which may provide better insights of environmental adaptation and survival (Bowman, 2006). Moraxellaceae unclassified was abundant in all samples except SUO. Arthrobacter was abundant in all samples except WI. The genus Arthrobacter, a member of the family Micrococcaceae, have been isolated from soil and sediments, but some clinical isolates were also reported (Busse and Wieser, 2014). Another 16 genera with average abundance more than 1% of the total sequences were Exiguobacterium (4.69%), Gillisia (3.96%), Planococcus (3.93%), Pedobacter (3.39%), Oxalobacteraceae unclassified (2.72%), Pseudomonas (2.69%), Sphingobacterium (2.18%), Caulobacteraceae unclassified (1.74%), Xanthomonadaceae unclassified (1.21%), Flavisolibacter (1.20%), Paracoccus (1.16%), Ralstonia (1.08%), Micrococcaceae unclassified (1.01%). In similar line, it was reported that the dominant airborne bacterial genera identified in the hospital environment were Staphylococcus spp. (50%), Micrococcus spp. (15–20%), Corynebacterium spp. (5–20%), and Bacillus spp. (5–15%) (Kim et al., 2010). Moreover, Staphylococcus (51%) and Micrococcus (37%) were dominant among the bacterial genera in Portuguese hospital (Cabo Verde et al., 2015). A culture-based study of tertiary care centre from Central India reported Coagulase-negative Staphylococci (CoNS) followed by Bacillus, Staphylococcus aureus and Pseudomonas aeruginosa in air samples (Bajpai et al., 2014). Micrococci, CoNS, Enterobacter and Pseudomonas were the predominant in the hospital air collected from west-Chennai, India using passive and active methods (Sudharsanam et al., 2012). The hospital indoor air samples showed the predominance of Escherichia coli, Staphylococcus aureus, Pseudomonas aeruginosa, Klebsiella sp. at Kalyani, West Bengal, India (Paul et al., 2015). Principal coordinate analysis (PCoA) was applied based on the weighted UniFrac distance matrix to compare the bacterial communities across the air samples. The P1 and P2 explained 49.12% and 19.55% of the variation in overall community structure, respectively (Fig. 6). We found that samples WO and SPO tended to cluster together. However, the remaining samples were far from this cluster and ungrouped. This plot showed that the majority of samples were independent and different from each other (Fig. 6).

Nosocomial infections are also known as hospital-associated infections (HAIs). The primary causative agents of HAIs are Enterococcus faecium, Staphylococcus aureus, Klebsiella pneumoniae, Acinetobacter baumannii, Pseudomonas aeruginosa and Enterobacter spp (in short ESKAPE pathogens). Some of the nosocomial pathogens showed multi-drug resistance (MDR) due to improper use of broad-spectrum antibiotics in healthcare settings (Khan et al., 2015). In this study, we obtained 22056 ESKAPE sequences, accounting for 4.42%, of the total 498671 sequences. The number of ESKAPE sequences were ranged from 90 to 10323 across different air samples. The lowest sequences were reported in SPO and WO, WI and SPI, moderate in SUI and MO, and higher in SUO, MI (Table S6 in supplementary material). Reasonably, the climatic conditions during spring and winter are unfavourable for the bacterial growth, that is the reason we observed the lowest pathogen load during spring and winter seasons. In contrast, during summer and monsoon seasons, the pathogen load was higher due to the optimum climatic conditions for the bacterial growth. We used next-generation sequencing to investigate the bacterial abundance and diversity in UHC during different seasons. Proteobacteria, Actinobacteria, Bacteroidetes and Firmicutes were the dominant phyla in the sampled air. Overall, air bacterial composition is comparatively simple in this study; only ten taxonomic families were accounting for ~75% of the total sequences determined. The longer sampling time and high flow rate of the sampler, combined with Illumina MiSeq sequencing could minimise the limitation of single sampling per season to determine the seasonal dynamics of air bacterial communities because air is continuously moving (Gao et al., 2017). However, multiple sampling in each season might have provided a better estimate of season-wise bacterial abundance and diversity. Also, the season-wise bacterial abundance in the air needs to be confirmed using qPCR of 16s rRNA gene (Lee et al., 2010).

We also found 31 ESKAPE pathogens in extremely low percentage (4.42%) of entire sequences reported and dominated by unclassified species of Pseudomonas, Acinetobacter and Staphylococcus.

Actinobacteria showed significant correlation with temperature, PM2.5 and PM10. Whereas, Proteobacteria and Firmicutes showed significant correlation with PM2.5 only. Exposure to these airborne bacterial pathogens may result in the emergence of respiratory ailments in human beings. The holistic approach, including administrative and environmental control, as well as personal protective measures, may regulate the airborne bacterial infections in healthcare settings. 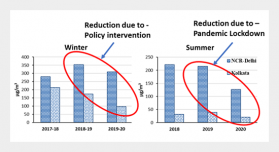