We developed two types of high performance nanofiber filters by increasing the uniformity of the fiber layer’s deposition on the substrate media and by fabricating nanofiber with a branched morphology, in which additional fibers were spun to radiate from the main fibers. We subsequently compared them with conventional and beaded nanofiber filters in terms of particle removal efficiency, filter pressure drop, and particle loading capacity. First, the uniformity of the nanofiber’s deposition, which was visually evaluated using optical and electron microscopes, was increased by removing the substrate surface charge during electrospinning. The uniform nanofiber filters demonstrated a higher filtration efficiency with a lower pressure drop than their conventionally electrospun counterparts, which exhibited irregular fiber layers. Second, branched nanofiber was fabricated by adjusting the viscosity of the polymer solution. The performance of the nanofiber filters was dramatically improved by the decrease in air flow resistance, which resulted from (1) a longer distance streamwise between the fibers and (2) a smaller diameter for the fibers. The enhanced efficiency was also due to (3) the additional fibers branching out from the main fibers.

In past decades, it has been well known that particulate matters pose a great threat to human health. Especially airborne particles smaller than 2.5 µm (PM2.5) can easily penetrate the human respiratory system and translocate to secondary organs including the brain causing various severe health issues including lung disease, heart disease and even premature death (Nel, 2005; Stone and Donaldson, 2006; Oberdörster et al., 2007). Many efforts have been made to reduce human exposure to particulate matters and minimize its health effects. Among the various efforts to control the air quality, air filtration is the most cost-effective way to remove airborne particles from inlet air flow. However, as the concerned particle size gets smaller, air filter media needs to be denser and thicker to improve filtration efficiency, which results in increasing filter pressure drop and thus increasing total operation cost. In order to solve this problem, many researchers have investigated nanofiber filter media, which consists of nanometer-scale fibers layered on top of a regular micrometer-scale filter media as a substrate, and these nanofiber filters improved filtration performance dramatically in terms of both filtration efficiency and pressure drop (Leung et al., 2009; Choi et al., 2017). Recently, beaded nanofiber filters have been proposed to decrease pressure drop because of larger streamwise inter-fiber distance and similar to the regular nanofiber filters performed with high filtration efficiency (Fong et al., 1999; Yun et al., 2010; Wang et al., 2015; Gao et al., 2017).

Fig. 1(a) shows a typical electrospinning setup consisting of a syringe pump with a conductive needle, a high voltage supplier and a grounded collector. First, polymer powder is dissolved in solvent using a mechanical stirrer at ambient temperature to minimize any possible damage on polymer chain structure and the polymer solution is delivered through a conductive needle at a controlled feeding rate using a syringe pump. Then the polymer solution is electrically charged by a high voltage power supplier when passing through the conductive needle and spun out by an electrostatic force between the needle tip and a grounded collector. The collected polymer fiber has very uniform fiber diameter in nanometer ranges and the fiber diameter and shape can be controlled by polymer solution properties like viscosity, surface tension, conductivity as well as electrospinning conditions like solution feeding rate, needle size, and electric field strength (Drew et al., 2003; Huang et al., 2003; Shenoy et al., 2005; Hekmati et al., 2013). It is well known that the nanofiber diameter is proportional to its polymer solution viscosity, which means a smaller fiber diameter can be fabricated by using lower viscosity polymer solution. However, when the solution viscosity is lower than a critical value, which is decided by the balance between solution viscosity and surface tension, polymer beads are formed along nanofibers as shown in Fig. 1(b) (right) (Baumgarten, 1971; McKee et al., 2004). These beaded nanofibers have been considered as defective because these beads keep streamwise inter-fiber distance longer than smooth nanofibers (Fig. 1(b), left) causing filtration efficiency decrease. Recently, researchers have investigated to use beaded nanofibers as a good candidate for air filter media because this longer inter-fiber distance of beaded nanofibers can improve filtration performance by increasing air permeability while still providing high filtration efficiencies. Fig. 1. (a) Basic concept of electrospinning method and (b) smooth nanofibers (left) and beaded nanofibers (right).

Since nanofiber layer itself does not have enough mechanical strength to be used as filter media, composite filter media are manufactured to form a thin nanofiber layer on top of a substrate filter media. With this combination of a nanofiber layer and a substrate filter, nanofiber filter presents high filtration efficiency with sufficient mechanical support. However, commercialized nanofiber filters often present lower filtration efficiencies than their design specification due to the non-uniformity of nanofiber layer deposition. This has previously been a well-known issue in the fabrication of nanofiber filters due to the non-uniform surface charge distribution on the substrate filter surface (Fig. 2(a), left). This is because the electric field between the conductive needle tip and the grounded substrate surface is non-uniformly distributed on the uneven substrate filter surface as shown in the Fig. 2(a) (right) (Barhate et al., 2006; Barhate and Ramakrishna, 2007; Wang et al., 2009; Xu et al., 2016). Fig. 2(b) shows SEM (scanning electron microscope) images of nanofiber deposition on cellulose filter substrate using conventional electrospinning setup. The image on the right (Fig. 2(b)) shows a highly dense nanofiber deposition along the substrate cellulose fiber causing high air resistance. However, in the area shown in Fig. 2(b) (left), the nanofiber layer is widely open and acts like “pinholes,” thus causing a dramatic decrease of the filtration efficiency. This means the nanofiber layer non-uniformity plays a negative role in both the filtration efficiency and the filter pressure drop. Therefore, it is important to make uniform nanofiber deposition on the substrate filter media in order to improve the overall filtration performance. Fig. 2(c) shows the experimental electrospinning setup used to make a uniform nanofiber deposition, which consists of a syringe pump (EW-74900; Cole-Parmer), a 22G Blunt tip syringe, a high voltage power supply (205A-10R; Bertan Inc.), and a grounded rotating cylinder (70 mm in diameter) with cellulose filter media wrapping around it. In this research, nanofibers were fabricated with fixed operating conditions, such as polymer solution feeding rate (0.50 mL h–1), applied voltage (8.0 kV), needle tip-to-collector distance (10 cm) and cylinder rotating speed (250 rpm). 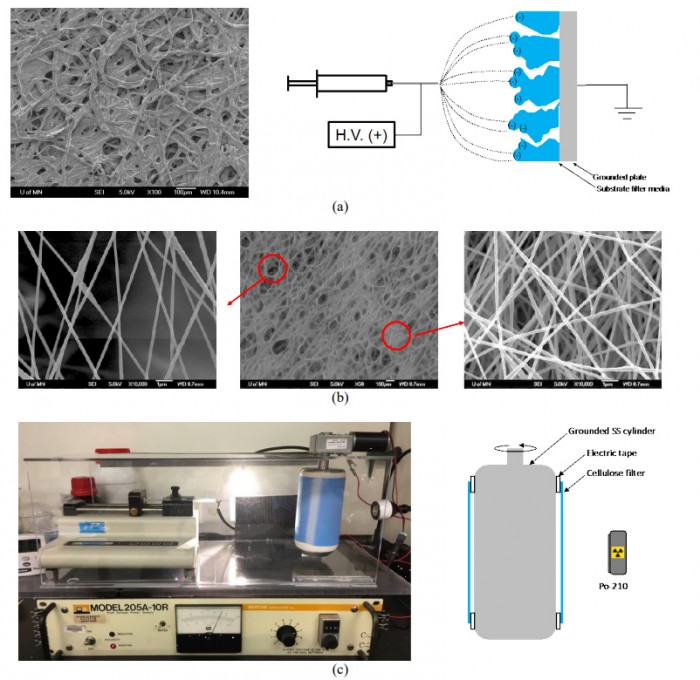 Fig. 3 compares 3 set of images between non-uniform (Fig. 3(a)) and uniform nanofiber deposition (Fig. 3(b)), photographs of nanofiber layer deposited on blue-colored cellulose filter media (left), SEM images (middle) and optical microscopic images (right). With this blue-colored cellulose filter as a substrate, we can easily evaluate the nanofiber layer uniformity even without using SEM inspection. Fig. 4 shows the filter efficiency/loading test setup for nanofiber filters, which consists of an atomizer to generate test solution droplets, a diffusion dryer to convert the atomized droplets into solid particles, a neutralizer (210Po) to discharge test particles, a test filter holder, and a Scanning Mobility Particle Sizer (SMPS 3936; TSI Inc.) to measure particle size distribution in upstream and downstream of the test filter. We generated KCl particles with an average particle diameter of 40 nm and the filtration face velocity was controlled to be 5 cm s–1. The filter pressure drop was monitored during the particle loading test by measuring differential pressure between upstream and downstream of the test filter. The filtration efficiency was calculated by measuring upstream and downstream particle size distributions from 20 to 500 nm. Fig. 5. Nanofiber layer uniformity effect on filtration performance: (a) filtration efficiency and (b) figure of merit.

Also, in order to quantify the overall filtration performance considering both the filtration efficiency and the pressure drop at the same time, figure of merit (FOM; also known as quality factor) was calculated for each filter sample as described below (Fig. 5(b)) (Wang et al., 2008).

where P is the particle penetration (dimensionless) through the filter and ΔP is the pressure drop (Pa) across the filter in the clean filter conditions. As implied from the equation, FOM is proportional to the filtration efficiency and reversely proportional to the pressure drop, thus higher FOM presents higher overall filtration performance. From the FOM comparison between the uniform and the non-uniform nanofiber samples, it was clearly observed that the uniform nanofiber samples presented higher FOM over the entire particle size range, which means uniform nanofiber deposition improved the overall filter performance in both filtration efficiency and pressure drop.

Fig. 6(a) shows polyethylene oxide (PEO; M.W. 1,000,000; Alfa Aesar) nanofibers electrospun from polymer solutions with various viscosities. Given that the solution viscosity increases exponentially with the increase of the polymer concentration (Thomas and Thomas, 1960) and the polymer solution viscosity affects the nanofiber morphology, mainly fiber diameter and bead formation, we fabricated various shapes of nanofiber structures by changing the weight concentration of PEO solutions. In this research, we fabricated six different shapes of nanofiber media from PEO polymer solutions with various viscosities ranged from 29 to 362 mPa·s (polymer weight concentrations ranged from 0.84% to 2%). Fig. 6. PEO nanofiber formation with various polymer solution viscosities: (a) various shape of beaded nanofiber with the viscosity range from 29 to 362 mPa·s and (b) SEM images of branched nanofiber.

Fig. 6(b) shows SEM images of branched nanofiber fabricated from polymer solution with a viscosity of 45 mPa·s (Sample #5), which has additional nanofibers spun out from each bead. These third nanofibers can improve the filtration efficiency dramatically as this filter has a much higher chance to capture particles while minimizing filter pressure drop owing to (1) the slip flow effect by the smaller fiber size (average diameter: 45 nm) (Choi et al., 2017) and (2) the longer streamwise inter-fiber distance by the micron-sized beads. We developed two kinds of high performance nanofiber filter media by increasing the uniformity of the nanofiber layer’s deposition on the substrate and by fabricating branched nanofiber. These filters were compared with conventional filters with respect to particle removal efficiency and filter pressure drop, and the figures of merit confirmed their enhancement in performance. The uniformity of the nanofiber’s deposition is a critical factor, as non-uniform deposition causes randomly distributed openings across the nanofiber layer, which, like pinholes, diminish the filtration efficiency. By removing the surface charge on the substrate media during electrospinning, the uniformity was drastically improved, resulting in a higher filtration efficiency with a lower pressure drop. We also fabricated branched nanofiber by adjusting the viscosity of the polymer solution to produce additional fibers radiating from every single bead on the main fibers. The performance of the nanofiber filters was dramatically improved by the decrease in air flow resistance, which resulted from (1) a longer distance streamwise between the fibers and (2) a smaller diameter for the fibers. The enhanced efficiency was also due to (3) the additional fibers branching out from the main fibers.