This paper describes the development of a laboratory-scale, electrically energized, fibrous-filter device, which includes particle precharger and fibrous filters in a reversed electric field. The collection principle and collection efficiency of this system was investigated.

When a fibrous filter was placed between the inner elements and an external electric field, notable filtration results were obtained for the wire electrodes located on the dusty side of the filter (Long et al., 2009), as shown in Fig. 1. The ionic current was generated similarly to the flowing gas, which was defined as conventional external electric field.

Fig. 1. Schematic of wire electrodes located at the dusty side: gas flow from (a) inside to outside (Case 1) and (b) outside to inside (Case 2).

For optimization of surface area and bag cleaning, the dusty gas usually flows from the outside of the bag to the inside of the bag in industrial applications, as depicted in Case 2. The wire electrodes are typically located far away from the bag to prevent sparking and back corona. The longer the distance between the wire electrode and the bag, the lower is the electric field on the bag surface; thus, electrodes are placed far away to prevent sparking and back corona tend to produce devices with poor electrostatic effects (Mermelstein et al., 2002; Podgórski and Balazy, 2008; Sanchez, 2013; Tu et al., 2016).

In a typical two-stage electrostatic precipitator with electrically energized fibrous filters, the charging and collection processes can be separated; these two types of processes are accomplished in two stages (Jaworek et al., 2017; Jaworek et al., 2018). Regardless of whether the wire electrode is located in dusty or clean gas, the main function of the collection stage can be maintained at high potential; accelerated charged particles are deposited on the surface of the bag. A model of filtration-charged particles in a reversed electric field was developed, as illustrated in Fig. 2. The ionic current was generated in opposition to the flowing gas, which was defined as reversed external electric field. 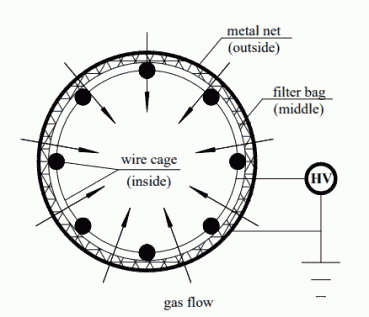 Fig. 2 illustrates the stainless-steel wire cage, which was comprised of framework and ring clamps to fix the bag, was maintained at high potential; the outside surface of the bag was grounded. The dusty gas flowed from the outside to the inside of the bag to maximize surface area. The wire electrodes were located in clean gas to optimize cleaning.

The Coulomb force of a charged particle in an electric field is:

The viscous force on a moving particle in the gas flow was given by:

where µ is the viscosity (Pa·s), dp the diameter of particle (m),

In Fig. 1, the charged particles are moved toward the filter bag by Coulomb force, so the velocity of a charged particle in the conventional external electric field can be written as:

However, in Fig. 2, the charged particles are moved against the filter bag by Coulomb force, and the velocity of a charged particle in the reversed external electric field can be written as:

It is empirically true that:

In a BF, the lower the velocity of a charged particle, the higher is the collection efficiency.

Distribution of the Electric Field

It is difficult to get the distributions of the electric fields directly. Therefore, commercial software COMSOL Multiphysics 5.2 was used for the solution of electric field based on Poisson equation.

Fig. 4 illustrates experiments in which a high electric field strength was achieved on the filter bag in a reversed electric field, although the applied potential was 1/10 that of the conventional electric field. In addition to energy saving, this apparatus avoided sparking discharge because of its low electric potential. 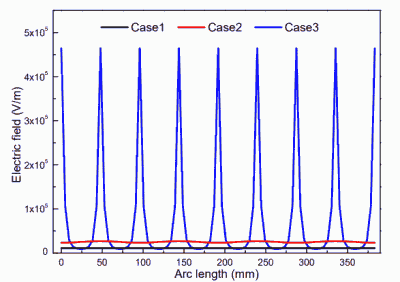 The measurements were carried out with the experimental setup shown schematically in Fig. 5. The experimental setup was composed of a conventional wire-tube particle precharger and fibrous filters in a reversed electric field. The stainless-steel tube had a diameter of 100 mm, and the stainless-steel corona wire was 2 mm in diameter and 1,000 mm in length. The collection stage consisted of a polymethyl methacrylate (PMMA) channel of square cross section, of 450 × 450 mm2, and dust hopper was located at the bottom. An exhaust fan was mounted at the outlet of the channel to control the air flow rate. The aerosol, which produced by dust generator, was injected to the channel at its inlet. Particle concentration was measured at the outlet of the channel by using a particle measurement device. The air flow velocity in the channel was measured by a hot-wire anemometer. 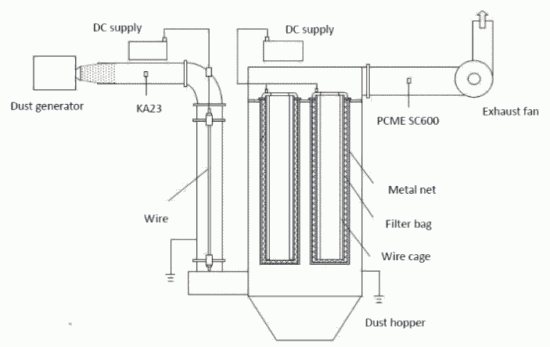 The precharger consisted of a wire-tube electrode and a DC supply. The space between the wire and the stainless-steel tube was 50 mm. The DC supply connected the wire electrode to a high-voltage power supply, and the tube was grounded.

The collection stage was consisted of a filter bag, wire cage (inside), metal net (outside), and DC supply. Filtration was in four circular acetate fiber bags, which were 120 mm in diameter, 1000 mm in length, and 1.55 m2 in total filter surface area. The stainless-steel wire cage consisted of eight cylindrical skeletons and several 8-mm-diameter rings. Stainless-steel netting, which was used to replace the bags with conductive yarns in the experiment, was fixed on the outside surface of every fiber bag. The space between the stainless-steel wire cage and the stainless-steel net was approximately 2 mm, which was the thickness of the circular acetate fiber bags. By DC supply, the wire cage was connected to high-voltage power supply model –60 kV/5 mA and +60 kV/5 mA, and the metal net was grounded. The collection efficiency of filtration-charged particles in the reversed electric field was measured at four filter face velocities, namely 1.0, 1.5, 2.0, and 2.5 m min–1.

If any relevant collection efficiency is close to unity, the performance can be accurately characterized with the outlet dust loading by penetration λ, which can be defined as:

Three filtration models were tested in the experimental setup: The results of the V–I characteristics of particle precharger and collection stage are given in Fig. 7.

Fig. 7. V–I characteristics of the experimental setup: (a) particle precharger and (b) collection stage. 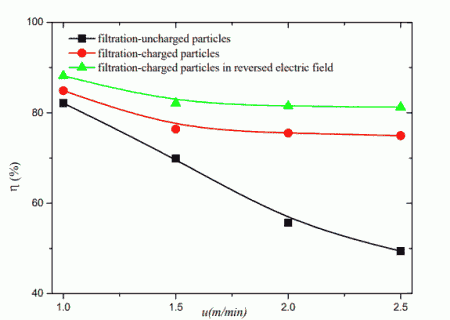 Effect of the Polarity of External Electric Field on Collection Efficiency

Fig. 9 illustrates that when a negative DC supply was applied on collection stage, the collection efficiency was 5–15% higher than that of the positive DC supply. Therefore, in the setup of charged particles in a reversed electric field, one of the highest priorities was the negative DC supply, which was consistent with the conventional electrically energized fibrous filters. 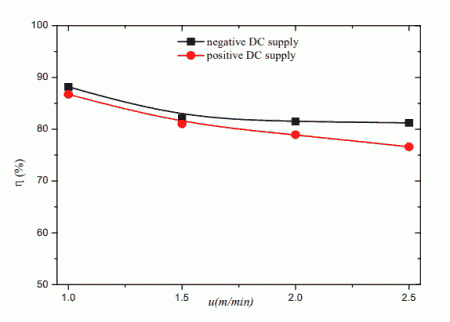 The particles, negatively charged in the precharger stage, flowed through the collection stage. When negative DC supply was applied on the collection stage, a negative polarity electric field was generated. The negatively charged particles were rejected by the electrostatic force from the filter layer. The dust was deposited on the surface of the fabric rather than on the fibers. Thus, regeneration of BFs was simple and efficient.

When a positive DC supply was applied, a positive polarity electric field was generated. The negatively charged particles were accelerated by electrostatic force into the filter layer. A positive result was that large particles were captured in the collection stage due to electrostatic agglomeration. A negative result was that the dust cake in the filter was difficult to remove. 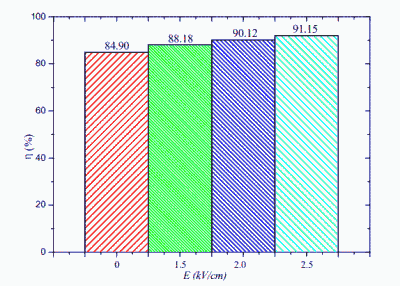 High collection efficiency and low corona energy consumption were achieved by these charged particles in this reversed electric field.

The measuring results of pressure drop are indicated in Fig. 11. 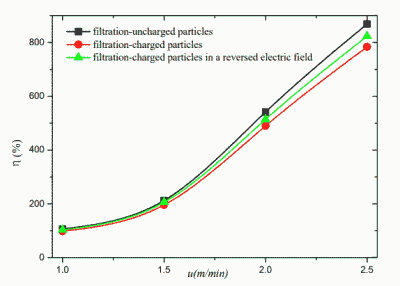 In this study, the collection efficiency of a laboratory-scale apparatus generating a reversed electric field to enhance the removal of filtration-charged particles was determined for different configurations. The following conclusions can be drawn: