This study investigated the chemical composition (carbonaceous species, water-soluble ions and metal elements) of fine particulate matter (PM2.5) emitted by gasoline and diesel vehicles. The emission factors of PM2.5, total hydrocarbons (THC), carbon monoxide (CO) and oxides of nitrogen (NOx) were also determined. The emission measurements were performed for four gasoline and four diesel vehicles on a dynamometer with a constant volume sampling system. Vehicles having larger engines and higher accumulated mileages had higher emission factors of gaseous pollutants. Moreover, the average emission factor of NOx was about 30 times higher for diesel vehicles than for gasoline vehicles. The average PM2.5 emission factors for gasoline and diesel vehicles were 1.57 mg km–1 and 57.8 mg km–1, respectively. The ratio of organic carbon to elemental carbon (OC/EC) was found to be a good indicator of gasoline vehicle emissions (OC/EC > 1) and diesel vehicle emissions (OC/EC < 1). Among water-soluble ions, Ca2+ and SO42– had the highest contribution to PM2.5 emitted by gasoline vehicles, while NO3–, SO42– and Ca2+ had the highest contribution to PM2.5 emitted by diesel vehicles. Na, Ca, Fe and Zn were the top four metal elements in terms of their contributions to PM2.5 mass for both types of the vehicles, while Cd, Cr, Pb and Sb were some of the toxic metal elements detected in PM2.5.

Emissions from mobile sources affect not only human health but also contribute to environmental problems such as acid rain and global warming (Geller et al., 2006). Concerns over atmospheric PM have also been increasing due to its importance in the global climate change (Huang et al., 2017). Water-soluble ions in fine particulates might disrupt the regional and global radiation balance due to their capability to absorb or scatter solar radiation and Earth’s thermal radiation (Gopal et al., 2015).

Eight in-use vehicles (model years 2006–2016) were selected for the experiment of which four were gasoline vehicles (abbreviated as G1, G2, G3 and G4) and the remaining were diesel vehicles (abbreviated as D1, D2, D3 and D4) (Table 1). The vehicles were selected to span a range of common gasoline and diesel vehicle types available in Taiwan. The test-vehicles included sedan cars, SUVs, light-duty trucks and heavy-duty trucks. The gasoline vehicles had engine displacement volumes ranging from 1,794 to 2,354 cc and accumulated mileages ranging from 30,180 to 186,438 km. Similarly, the displacement volume and the accumulated mileage of diesel vehicles ranged from 1,992 to 7,684 cc and 45,848 to 257,284 km, respectively. Gasoline vehicles were equipped with three-way catalytic convertors, while diesel vehicles were equipped with diesel oxidation catalysts. Moreover, diesel-SUV (D1) was also equipped with diesel particulate filter (DPF). G4 was the vehicle of Taiwan-Phase V emission standard, while the rest of test-vehicles were of Taiwan-Phase IV emission standard.

Motor unleaded gasoline (lead content ≤ 0.013 g L–1) and automotive diesel fuel supplied by CPC Corporation, Taiwan, were used for the gasoline and diesel vehicles, respectively. The average fuel densities (at 15°C) were 751.9 kg m–3 (gasoline) and 833.6 kg m–3 (diesel). According to the fuel specifications provided by CPC Corporation, the sulfur content in both of the gasoline and diesel fuel was ≤ 10 mg kg–1.

Emissions of gasoline vehicles (G1, G2, G3 and G4) and light-duty diesel vehicles (D1 and D2) were tested in a chassis dynamometer system (Schenck 500/GS112/ V200/K400), while the emissions of heavy-duty diesel vehicles (D3 and D4) were tested in an engine dynamometer system with a DC-IV control (Schenck Dy NAS 350). The engine dynamometer had an automatic control system capable of contributing the maximum power of 335 kW and torque of 800 Nm. The sampling system consisted of a dilution tunnel, a constant volume sampling (CVS) unit (HORIBA CVS-9300T) and a gas analyzer system (HORIBA MEXA9200D) (Fig. 1). The dilution air was passed through a High Efficiency Particulate Air (HEPA) filter to avoid sample contamination.

Fig. 1. Schematic of the experimental setup.

The gasoline vehicles (G1, G2, G3 and G4) and light-duty diesel vehicles (D1 and D2) were tested under the New European Driving Cycle (NDEC). The detailed description of the driving cycle can be found elsewhere (DieselNet, 2019a). Briefly, it is a combination of two different cycles namely, Urban Driving Cycle (UDC) and Extra Urban-Driving Cycle (EUDC). In a complete NDEC cycle, the vehicle is driven through 10.9314 km in 1,180 s with an average driving speed (excluding stops) of 43.10 km h–1. On the other hand, the heavy-duty diesel vehicles were tested under U.S. EPA FTP transient cycle procedure. The description of the test cycle can be found elsewhere (DieselNet, 2019b). The test cycle is based on the U.S. EPA Urban Dynamometer Driving Schedule (UDDS) for Heavy-Duty Vehicles. It encompasses a cold start after ‘parking’ the engine, and then idling, acceleration and deceleration phases. Different speeds and loads are sequenced to simulate real-world driving patterns. The first phase is followed by the second recurrence that constitutes a hot-start after pausing for 1,200 s upon the completion of the first phase. Samples for cold- and hot-start phases were collected separately. The composite emission factor was obtained by using a weighting factor of 1/7 and 6/7 for cold- and hot-start emissions, respectively. The equivalent distance of the test cycle (10.3 km) was used to calculate emission factors. Detailed information can be referred to Yang et al. (2007).

Sampling Strategy and Measurement of Pollutants

The diluted exhaust gas was collected in Tedlar sampling bag (SKC Inc.) and analyzed for gaseous pollutants. CO and CO2 were measured by non-dispersive infrared absorption (NDIR) (HORIBA, Model AIA-120 analyzer). THC and NOx were measured by heated flame ionization detector (FID) (HORIBA FIA-120) and chemiluminescence (HORIBA CLA-155), respectively. The gaseous pollutants were also measured in the background (indoor air) during each test and the background correction was applied to the test results.

A cyclone separator was used to separate PM2.5 fraction from the exhaust particles. The PM2.5 fraction was collected on a quartz filter (diameter = 47 mm) at the temperature below 52°C. The sample was analyzed for the mass concentration and the chemical composition. The filters were conditioned at 20–23°C temperature and 30–40% relative humidity for 24 hours before and after sampling. The weights of conditioned filters were measured (Sartorius balance, model Cubis 6.6S-DF, sensitivity 10–6 g) and emission factors were calculated.

In addition to the direct measurement, the PM2.5 emission factors for diesel vehicles were estimated by using an equation suggested by Taiwan EPA (2017) in Taiwan Emission Data System (TEDS)-9.0 (Eq. (1)).

In Eq. (1), ZML represents the zero-mileage emission level in g km–1 (provided by the manufacturer); DET is the deterioration factor defined as the increase in emission factor (g km–1) per 10,000 km (provided by the manufacturer); CUMMIL is the accumulated mileage of vehicles in km; the correction factor (0.92) represents the fraction of PM2.5 in total suspended particulates (TSP) emitted by diesel vehicles.

The PM2.5 filter with sample was cut into four equal pieces for the analysis of OC, EC, water-soluble ions and metal elements, respectively. Thermal/optical carbon analyzer (DRI, model 2001, Reno, USA) was used for analyzing OC and EC following the Interagency Monitoring of Protected Visual Environments (IMPROVE) protocol. Water-soluble ions were extracted from the filter sample in distilled deionized water by using an ultrasonicator (Branson, model 5210). The extract was passed through a 0.4 µm filter and analyzed for water-soluble ions by using ion chromatography (IC, Dionex, model DX-120). The eluent for cation analysis was 20 mM methane sulfonic acid while it was 1.8 mM Na2CO3/1.7 mM NaHCO3 for anion analysis. Calibration lines were made by using cation standard from AccuStandard (210125090) and anion standard from High-Purity Standards (1033506 and 1034819). The coefficient of determination (R2) of the calibration equations were more than 0.995. For elemental analysis, a part of PM2.5 filter sample was digested in a 1:3 mixture of HNO3 and HCl on a hot plate for 1 hour. The digested sample was analyzed for the following elements: Al, Ca, Fe, Mg, Mn, Na, K, Pb, Zn, Ni, V, Cu, Cd, Mo, Co, Se, Sr, As, Ba, Sb and Sn. An inductively coupled plasma-optical emission spectrometer (ICP-OES, Thermo Scientific, model iCAP 6000 Series) was used for the analysis of metal elements. Details of the analytical method can be found elsewhere (Yang et al., 2018). Laboratory blanks were run for the quality control. Blank concentrations were negligible compared with the corresponding sample concentrations.

Average emission factors of detected chemical species have been calculated for gasoline and diesel vehicles (Table 2). The chemical constituents of PM2.5 have been discussed under three groups (carbonaceous species, water-soluble ions and metal elements) in the following sections. 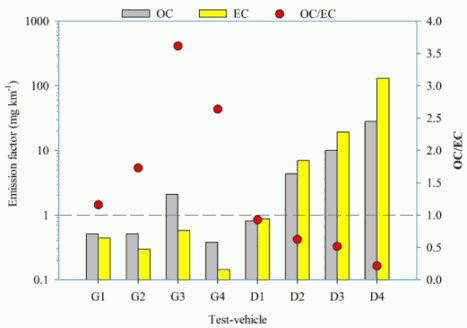 The authors would like to acknowledge ARTC (The Automotive Research and Testing Center), Taiwan, for providing emission testing facility. This research was funded by Taiwan EPA (EPA-106-FA13-03-D047).