Selective catalytic reduction (SCR) of NOx with NH3 is a mainstream technology for the removal of NOx emitted from mobile and stationary sources (Xu et al., 2018). V2O5/TiO2 doped with WO3 or MoO3 has been widely used in the past decades (Liu et al., 2019; Wang et al., 2020). Because vanadium is a threat to human health and the environment (Li et al., 2017; Yu et al., 2017), a great deal of attention has been paid to develop an environment-friendly vanadium-free SCR catalyst with high activity.

Cerium-based catalysts are regarded as promising substitutes for commercial vanadium-based catalysts owing to the excellent oxygen storage capacity and redox property of CeO2 (Li et al., 2012a; Jiang et al., 2018). A series of cerium-based SCR catalysts have been synthesized and investigated for the SCR of NO with NH3, such as Ce-Ti oxides (Xu et al., 2008; Gao et al., 2010b; Li et al., 2012b), Ce-W/TiO2 (Chen et al., 2010; Shan et al., 2012; Jiang et al., 2015b), Ce-Cu/TiO2 (Gao et al., 2010a), Ce-Sn-Ox (Li et al., 2013) and Ce-Mo/TiO2 (Liu et al., 2014; Jiang et al., 2015a; Geng et al., 2017). In order to improve the performance of cerium-based catalysts, some researchers tried to treat them with non-metals or add non-metals to them. Gu et al. (2010), Zhang et al. (2016) and Yang et al. (2016b) treated CeO2 with SO2, ammonium sulfate and HF, respectively. All of them found that the treated CeO2 possessed better SCR activity than the untreated one. Yu et al. (2016) reported that hydrogen pretreatment could substantially enhance the NH3-SCR activity of Ce-Ti catalyst. Zhang et al. (2014) and Jin et al. (2017) observed the promotional effect of fluorine additive on the NH3-SCR over CeO2-TiO2 and CeO2(ZrO2)/TiO2, respectively. Concerning the effect of Cl on cerium-based catalysts, there are a few reports. Yang et al. (2016a) used NH4Cl as the Cl source and studied the effect of Cl on Ce/TiO2 catalyst. The results indicated that Cl had a negative impact on its catalytic activity due to the inhibition of the adsorption of NH3 and NOx species. However, in this work, we treated Ce-Ti oxides with different concentrations of hydrochloric acid and found that their activities were improved, especially at low temperatures. Thereafter, a series of characterizations including BET, XRD, XPS and NH3-TPD were performed to provide insight into the substantial changes in Ce-Ti oxide catalysts caused by hydrochloric acid.

The Ce-Ti oxide was prepared by a single step sol-gel method. The mass ratio of CeO2:TiO2 was set as 20:100. A solution of titanium butoxide (TBOT) and anhydrous ethanol was added dropwise to a solution of deionized water, 65–68 wt% nitric acid and cerium nitrate hexahydrate (Ce(NO3)3∙6H2O) at room temperature. The molar ratio of the above chemicals was 1:35:19:2:0.1. After vigorously stirred for 3 h at room temperature, the mixture was dried at 80°C for 24 h to form xerogel, followed by calcination at 500°C for 5 h in air. The obtained sample was denoted as CT.

The hydrochloric acid treated samples were prepared by incipient wetness impregnation with desired aqueous hydrochloric acid solution on CT. The resulting slurries were left to stand for 24 h and dried at 80°C for 12 h. The HCl-treated catalysts were denoted as CTx and x represented the molar ratio of Cl and Ce.

The Brunauer-Emmett-Teller (BET) surface areas of the samples were obtained from N2 adsorption-desorption isotherms at –196°C using ASAP2020-M (Micromeritics Instrument Corp.). The pore volume and average pore diameter were determined by the Barrett-Joyner-Halenda (BJH) method.

The temperature programmed desorption of NH3 (NH3-TPD) was analyzed using a FINESORB-3010 chemisorption analyzer (FINETEC Instruments Corp.) with a thermal conductivity detector (TCD). Firstly, 100 mg of the sample was pretreated at 500°C in He for 1 h and cooled to room temperature. Next, the sample was exposed in a 0.5% NH3/He (30 mL min–1) gas flow for 1 h and purged with He for 1 h to remove physically adsorbed species. Finally, the sample was heated at a rate of 10℃ min–1 up to 700°C under He flow.

Fig. 1 shows the variation of NO conversion as a function of reaction temperature over Ce-Ti oxides treated by different concentrations of hydrochloric acid. It was clear that the treatment by hydrochloric acid could significantly improve the SCR activity of Ce-Ti oxides, especially in the temperature range of 200–350°C. When the molar ratio of Cl/Ce was 5:100, the NO conversion rose from 58.8% to 83.8% at 250°C. In the temperature range of 275–400°C, more than 90% of NO conversion was obtained over CT5. The further increase in hydrochloric acid concentration resulted in the decrease in the catalytic activity. Though the catalytic activity of CT10 was lower than that of CT5, it was higher than that of CT without HCl treatment. These results indicated that hydrochloric acid treatment had a positive effect on the Ce-Ti catalyst for the SCR of NO with NH3 at low temperature. On the contrary, Yang et al. (2016a) found that Cl acted as an inhibitor on the catalytic activity of Ce/TiO2. This might result from the difference in the interaction between different Cl sources and Ce/TiO2. 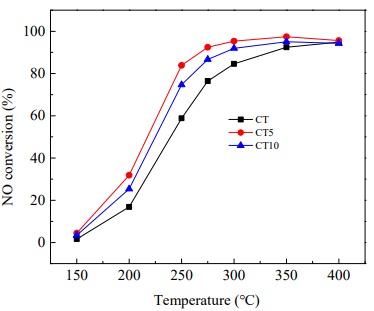 The physical properties of the various samples are listed in Table 1. The BET surface area decreased after hydrochloric acid treatment. The pore size distributions of three samples were measured from N2 desorption isotherm using cylindrical pore model (BJH method) and shown in Fig. 2. CT yielded the pore diameter distribution centered at about 5.16 nm, while CT5 and CT10 illustrated smaller pore distributions with average pore diameters of 5.08 nm and 5.03 nm, respectively. It could be also seen that the pore volume of the small pores reduced and that of the large pores increased slightly after hydrochloric acid treatment. However, the total pore volume decreased. It meant the block of the small pores or the agglomeration of the catalyst during the treatment process of HCl. Wang et al. (2015) found the similar phenomena in the study on the effect of F or Cl on Mn/TiO2 catalyst. Although BET surface area and total pore volume decreased, the SCR activity increased after the treatment of hydrochloric acid. It suggested that the BET surface area was not a main factor for the enhanced SCR activity of CT after hydrochloric acid treatment. The XRD patterns of different samples are presented in Fig. 3. Only the diffraction peaks ascribed to anatase TiO2 were detected, while the characteristic peaks of CeO2 were not observed. This demonstrated that the treatment byhydrochloric acid had no impact on the dispersion of CeO2 on the surface of TiO2. CeO2 was still highly dispersed and existed as amorphous or highly dispersed species in CT. However, the intensity of the diffraction peaks due to anatase TiO2, especially the peak at 2θ = 25.3°, was found to increase slightly after CT was treated by hydrochloric acid. It might be due to the fact that the intercalation of Cl− into TiO2 lattice might cause the expansion of TiO2 lattice since the radius of Cl− is much larger than that of Ti4+ (Wang et al., 2015). Fig. 4 shows the Ti 2p XPS spectra of CT and CT5. The binding energies (BE) of Ti 2p1/2 and Ti 2p3/2 were about 464.2 and 458.5 eV on CT. It suggested that Ti existed in its highest oxidation state (Ⅳ) (Fang et al., 2007). After CT was treated by hydrochloric acid, its BE values of Ti 2p shifted to higher ones. It is known that the Ti 2p BE values of Ti3+ are 1.8 eV lower than those of Ti4+ (Fang et al., 2007). Therefore, Ti still existed as Ti4+ on CT5. It should be noted that the intensity of Ti 2p peaks decreased obviously after the treatment by hydrochloric acid. This might be attributed to the fact that an interaction between hydrochloric acid and TiO2 led to the intercalation of Cl− into TiO2 lattice, which was in line with XRD results. The deconvoluted Ce 3d XPS results of catalyst samples are shown in Fig. 5. The peaks labeled u, u", u"' and v, v", v"' are assigned to Ce4+, while u' and v' are attributed to Ce3+ (Chang et al., 2013a; Devaiah et al., 2014). Compare with CT, the intensity of the Ce3+ peaks increased remarkably over CT5. The ratios of Ce3+/Ce, calculated by the area of the corresponding characteristic peaks, were 28.9% and 37.0% over CT and CT5, respectively. It indicated that the treatment by hydrochloric acid could increase the amount of Ce3+ and decrease the amount of Ce4+ on the catalyst surface. This might be because the interaction of hydrochloric acid and Ce species promoted the transformation of Ce4+ into Ce3+. It is widely accepted that Ce3+ could create a charge imbalance and form oxygen vacancies and unsaturated chemical bonds, which is helpful for the formation of chemisorbed oxygen on the catalyst surface (Guo et al., 2015). Fig. 5. XPS spectra of Ce 3d for the catalyst samples.

After a curve-fitting procedure in Fig. 6, the XPS spectra of O 1s could be deconvoluted into two peaks for CT. The peak at 529.8 eV could be assigned to lattice oxygen (denoted as Oα), the other one at 531.2 eV was related to chemisorbed oxygen (denoted as Oβ) (Liu et al., 2009; Peng et al., 2013). However, as for CT5, the BE values of Oα and Oβ moved to higher ones. The ratio of Oβ/O, calculated by the area of the corresponding peaks, increased from 28.1% to 32.6% after the treatment of hydrochloric acid. Oβ was considered to be more active than Oα due to its higher mobility, which contributed to nitric oxide adsorption and particularly the oxidation of NO to NO2 (Chang et al., 2013b). This could be beneficial to improve the SCR activity at low temperature (Zhang et al., 2014). Fig. 6. XPS spectra of O 1s for the catalyst samples.

NH3-TPD analysis was performed to study the surface acidity of the catalyst samples and the results were presented in Fig. 7. Each catalyst sample contained a broad NH3 desorption peak, which could be assigned to the weakly absorbed NH3 on the Brønsted acid sites (Sang et al., 2012; Zhao et al., 2016). The other small peak centered at about 600°C was associated with the strongly absorbed NH3 on the Lewis acid sites (Sang et al., 2012; Zhao et al., 2016). After HCl treatment, there was almost no change on NH3 desorbed on the Brønsted acid sites, while a noticeable increase in NH3 desorbed on the Lewis acid sites. It is accepted that the adsorption of NH3 on catalyst surface is greatly dependent on the surface acidity and is crucial for the SCR reaction. Therefore, the enhancement of Lewis acidity should be responsible for the improved SCR activity of CT. 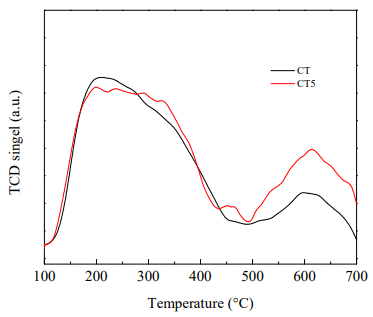 In this work, the influence of hydrochloric acid on the selective catalytic reduction of NO with NH3 over Ce-Ti oxide catalysts was investigated. The experimental results showed that the treatment of hydrochloric acid had a promoting effect on the SCR performance of Ce-Ti oxide catalyst. The hydrochloric acid treatment could lead to the increase in the concentration of Ce as well as the amount of Ce3+ and chemisorbed oxygen on the catalyst surface, which was beneficial for the enhancement of the SCR activity at low temperature. Furthermore, the enhancement of Lewis acidity should be also responsible for the improved SCR activity of CT. 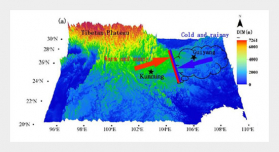