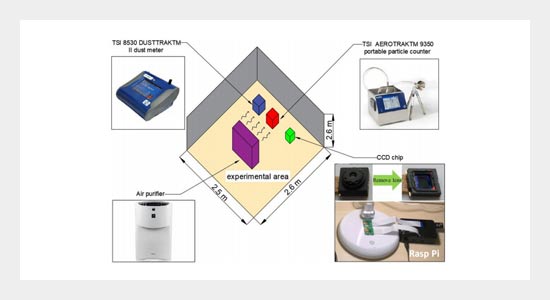 Particle deposition on indoor surfaces has lately received great attention due to increasing concern about the effects of particle exposure on human health. In this study, we developed an easy and low-cost method of measuring the deposition amounts of different-sized particles and evaluated it through particle concentration measurement and theory calculation. First, a clean charge-coupled device (CCD) chip was exposed to air in order to receive the deposition of airborne particles. After sedimentation, images generated by the CCD of the deposited particles were analyzed, and the quantity of particles in each size range (> 2 µm) was identified based on the unique pixel sizes. Using a particle counter and a dust monitor, we also measured the concentrations of airborne particles with different sizes near the chip during sedimentation and compared them with the numbers of settled particles. The results show that the particle deposition can be quantified with this method and that a positive correlation exists between the deposition amounts and the particle number concentrations.

Aerosol particles can deposit onto indoor surfaces and onto human bodies. For indoor surface deposition, the particles can cause material damage such as soiling and chemical deterioration (Nazaroff et al., 1990) and can lead to damage in electronic equipment (Weschler et al., 1996). The contaminated surfaces also play an important role in the transmission of enteric and respiratory viral infections (Lei et al., 2017). For body surface deposition, the particles have two possible consequences. First, these deposited particles can absorb bacterial semivolatile organic compounds (SVOCs), heavy metals, and polycyclic aromatic hydrocarbons (PAHs), which can cause adverse health risks through dermal exposure. Second, the particles deposited onto eyes and skin may cause irritation, injuries, allergic reactions, and diseases (Leonardi et al., 2012). Hence, research on the particle deposition measurement method has profound meanings.

The common methods currently used to measure the sedimentation flux of particulate matter are the fluorescence method (Truskett, 2003), neutron activation analysis (NAA) (El-Araby et al., 2011), and proton-induced X-ray emission fluorescence spectrometry (PIXE) (Heidam et al., 1999). These methods are complicated and expensive to operate. For example, the fluorescence method must first label fluorescent particles and measure the amount of fluorescence. Both NAA and PIXE have high requirements for analytical materials and special large instruments. These technologies are unsuitable for daily real-time monitoring such as the settlement on indoor and human body surfaces. Details of the methods to measure particle depositions are in Lai (2010).

In the past two decades, CCD and CMOS chips have been widely used in photography. They use photosensitive elements as the basic means to capture images (Pryor et al., 1997). The image sensor can use photoelectric sensors to convert photoelectric signals into digital data. CCD sensors are superior to CMOS sensors in terms of sensitivity, resolution, and noise control, while CMOS sensors are characterized by lower cost, lower power consumption, and higher integration (Miazza et al., 2004). However, because of the continuous advancement of the CCD and CMOS sensor technology, the difference between the two has gradually narrowed. In the past, Manaresi et al. (2003) used a CMOS chip to conduct individual cell manipulation and detection. Löffler et al. (2011) investigated the dynamics and precise deposition of charged polymer microparticles onto a microelectronic chip. Wagner et al. (2011) used a surface electrode to generate an electric field in a programmable mode on an integrated circuit; then, they spatially selectively deposited charged particles onto the integrated circuit. Corkidi et al. (1998) and Jung and Lee (2016) used a CMOS chip microscope to count real-time bacterial colonies and other microbial colonies. In these articles, there are no direct measurements of particulate deposition using CCD/CMOS chips, but they have important significance and guiding value for this study.

In this paper, a combination of the CCD chip sensor and Raspberry Pi is used to measure the sedimentation of particles. The images taken by the CCD chip are processed by a MATLAB imaging process code to directly obtain the size distribution of deposited particles. The results were also compared with the measured concentrations and theory calculations.

We selected a CCD chip with the image area of 2592 µm × 1944 µm and the pixel size of 1.4 µm × 1.4 µm. This CCD chip was refitted from a camera (OV05647-G04A; OmniVision, USA) by removing its lens (Fig. 1). Since the CCD chip was directly exposed to the light, the color and intensity of the light source and the distance of the light source from the chip affect the imaging results. Finally, we selected soft white light, which had even output and uniform distribution. When particles deposited onto the chip, they would block the light, and the pixels with the same size as the particles would become black. By analyzing the pixel color of the chip, the number and size of settled particles could be calculated. The chip can identify particles with diameter of at least 1.4 µm. The images were automatically saved by a Raspberry Pi (Model B+; UK) connected with the chips. In this study, when a solid particle deposited onto the CCD chip, its projected area, which was the same size as the particle, could be obtained as the product of the number of blocked pixels (n) and the area of each pixel (a). The particle equivalent diameter dp is calculated from the projected area by Eq. (1):

The number of projections is the particle number; therefore, the particle deposition flux is calculated by Eq. (2):

where T is the time length for the chip exposed in the air, A is the area of the chip, and Nc,dp is number of deposited particles (projections) with diameter dp over period T. MATLAB image-processing tools were used to solve these equations.

Validation for the CCD Sampling System

For each time interval, two images were recorded: one was captured at the beginning of the interval, and the other was captured at the end of the interval. Since most of particles are solid in air environment and overlap of deposited particles is rare, the sizes of identical particles do not change during the sampling time (Fig. 3). By comparing these two figures, we obtained the size distribution of the settled particles during this time interval. Fig. 3 shows the pair of images in Time Interval 2 (35–45 h) and their reconstructions. These two images were only small fractions of their originals due to their large sizes. Based on Fig. 3 and Eq. (1), a custom MATLAB program was used to analyze the size distribution of deposited particles larger than 2 µm within 10 hours. In Time Interval 2, for the diameters of 2–3 µm, 3–5 µm, and > 5 µm, the averaged deposited particle number on the chip was 23, 28, and 6, respectively.

In addition, CCD chip may have static electricity which can affect the particle deposition (Feng et al., 2016; Feng and Cao, 2019). As shown in Fig. 1, we used two CCD sensors in the experiment. One CCD sensor was powered on during the sampling period, while the other CCD sensor was powered off. Comparing the number of deposited particles on these two CCD chips, the difference is not obvious, which means static electricity does not have an obvious effect on the performance of the sampling system. Comparison with the Measured Concentration Table 1 also shows the differences in deposited particle numbers obtained by CCD and theoretical calculation. Especially for small particles with the diameter of 2–3 µm, the CCD-measured number is smaller than the theoretical calculation. Since the chip resolution in the experiment is not sufficiently high (1.4 µm × 1.4 µm), the identification capacity for small particles of 2–3 µm was weak. The concentration of particulate contaminant in the air fluctuates in the 10-hour time interval, and the sedimentation of particulate matter on the small chip is slightly random. These factors also result in the deviation from theoretical calculations.

In addition, the deposition measurement approach based on the CCD chip has limitations. First, this method can only identify particles with diameters larger than 2 µm. Smaller particles cannot be distinguished through CCD imaging. With respect to dealing with smaller particles (< 2 µm), maybe using a higher-resolution CCD chip can identify the smaller particles. Second, although the soft white light used has even output and uniform distribution, its intensity has small variations. Therefore, for each image, we calculated the standard variation of the particle number under different light intensities. Third, because the CCD chip is very small, the particle deposition onto this small area is stochastic. In future studies, further verification is needed in terms of the repeatability and stability. Sampling data from several chips should be compared with those directly counted through the microscope. Besides, the indoor humidity may affect the particle concentration (Feng et al., 2018), and service life of the CCD sensor, which is exposed in the air and captures particles directly for a long time. It is indispensable that some research should be conducted to test its service life and performance under different humidity.

In this study, we developed and evaluated a simple method of measuring particle deposition. We used a CCD chip without a lens and MATLAB image processing code to analyze the size distributions of deposited particles. The results were then compared with the measured airborne concentrations and theory calculations. The deposited particle numbers obtained by using the CCD chip positively correlated with the measured airborne particle concentrations, i.e., higher particle concentrations in the air resulted in more observable deposited particles and vice versa. In addition, the amounts of deposition measured using the chip displayed a trend similar to our calculations, but quantitative differences remained due to the low resolution of the chip and uncertainty in the deposition.