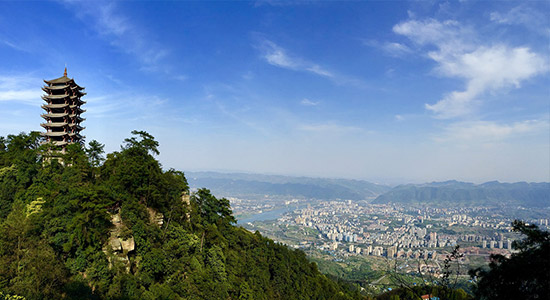 Daily PM2.5 samples were collected at a rural background station (JinYun) located in Chongqing across four consecutive seasons from October 2014 to July 2015. The major water-soluble inorganic ions (WSIIs), organic carbon (OC) and elemental carbon (EC) were analyzed, and their chemical characteristics, transport pathways and potential source regions were investigated. The average annual PM2.5 concentration was 56.2 ± 31.0 µg m–3, of which secondary inorganic aerosol (SNA) and carbonaceous aerosols composed 41.0% and 29.4%, respectively. Higher concentrations of and contributions from SO42–, which were likely caused by the secondary transformation of SO2 into SO42–, were observed in summer than in autumn and spring. Additionally, transportation from the urban area of Chongqing (Yubei) played an important role in elevating the SO42– during this season. Although the accumulation of PM2.5 during pollution episodes in winter was also due to aqueous-phase reactions, based on the entire year, NO3– formation may have been primarily driven by homogeneous gas-phase reactions. Furthermore, the aerosol environment was ammonium-rich, and NH4+ formation promoted the production of NO3– at lower temperatures. The carbonaceous component, which consisted of 81.0–84.6% OC, exhibited higher concentrations in winter than in the other seasons; 50.0–77.2% of the total OC, in turn, was contributed by primary organic carbon (POC). Potential source contribution function (PSCF) analysis suggests that the site was mainly affected by regional pollution originating in the southwestern and northern areas of Chongqing.