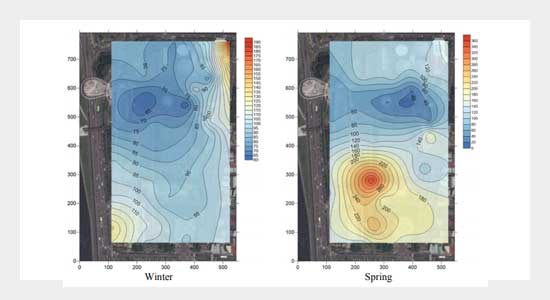 Municipal wastewater treatment processes have the function of removing harmful pollutants in the wastewater. However, there are probably several problems of air emissions related to these processes, especially for residents who live near a wastewater treatment plant. Volatile organic compounds exposure increases the risk of cancer. Thus, the health risk of residents to ambient volatile organic compounds exposure is essential to be conducted. One hundred and three volatile organic compounds (VOCs), total volatile organic compounds (TVOCs), and some prominent air pollutants (CO, CO2, NH3, H2S, PM1, PM2.5, PM7, PM10, TSP) were investigated at the surface of an underground wastewater treatment plant in Taipei City during four different seasons. Twenty four VOCs were identified, some of which were categorized as carcinogenic to humans (Group 1) and possibly carcinogenic to humans (Group 2B) according to the International Agency for Research on Cancer. The mean values of CO, CO2, PM1, PM2.5, PM7, PM10 and TSP were found to be 0.64 ppm, 293.68 ppm, 1.37 µg m–3, 3.20 µg m–3, 10.74 µg m–3, 13.48 µg m–3, and 16.90 µg m–3, respectively. NH3 and H2S were not detected in the present study. The health risk for residents was estimated following the method from United States Environmental Protection Agency (U.S. EPA). The cumulative of carcinogenic risk was 3.48 × 10–5 and categorized as a possible risk. In addition, the result was also possibly affected by traffic nearby. The magnitude for non-carcinogenic risk index was less than 1.

Various types of contaminants are released into the atmosphere during the process of wastewater treatment and pollute the environment in numerous ways. There are odor problems as well as production of greenhouse gases during wastewater treatment (Hua et al., 2018; Rai, 2018).Volatile organic compounds (VOCs) and other gaseous pollutants, such as methane, ammonia, hydrogen sulphide and particulate matter were detected in air surrounding the wastewater.

Aeration and biological treatment have influences on the fates of aromatic volatile organic compounds (VOCs) in wastewater treatment processes (Chen et al., 2013). VOCs in ambient air are an increasing concern because many of them have been identified to be human carcinogens (Chen et al., 2016). Ammonia released into the atmosphere can constitute a source of olfactory nuisance (Chou and Wang, 2007). Hydrogen sulfide has peculiar smell and is also toxic to humans and environment (Liu and Wang, 2017). Particulate matter may affect the human respiratory, cardiovascular, and nervous system (Fang et al., 2010; Haynes et al., 2012; Wu et al., 2013; Abe et al., 2018; Zhang et al., 2018).

All sampling collection was in the recreational sport park that was built on Municipal wastewater treatment plant A. The whole park was divided into four areas (A, B, C, and D area), and from each area, samples were taken at several points. The total sampling points for all areas were 30 (Fig. 1), while VOCs samples were taken at only one point for each of the four areas. The sampling was set at 1.2 m from the ground. Sampling periods were chosen in February 2016 (winter), May 2016 (spring), August 2016 (summer), and November 2016 (autumn). Samples were taken once in every season during the day of 08:00 am to 10:00 am. Fig. 1. Location of the sampling site.

Sampling and its analysis were described in detail in a previous study (Widiana et al., 2017). VOCs samples were collected using passive flow control canisters with volume 6 L and flow rate was fixed at 40 mL min–1. All canisters were cleaned and vacuumed using humid N2 pure gas toguarantee their vacuum quality before sampling. This study adopted the United States Environmental Protection Agency Method TO-15 and Photochemical Assessment Monitoring System for quality control during the sampling, preservation, transportation, and analysis. Air samples were then analyzed using a gas chromatograph (GC, Agilent 6890N) and a mass spectrometer (MS, Agilent 5973MSD). The GC oven temperature was set at 32°C, increased to 200°C, and kept constant for 3 min. Several standard gases were used to calibrate VOCs (Ou-Yang et al., 2017). For each compound, calibration was done and a good linear fit was observed with R2 > 0.99.

Health Risk Assessment for the Residents

Health risk assessment focused on the chronic exposure to VOCs that are carcinogenic or non-carcinogenic, rather than acute exposure (He et al., 2015). The lifetime cancer risk (LCR) is calculated using the equation (Singh et al., 2016):

Non-carcinogenic risk is characterized in terms of a hazard index (HI) which is defined as the ratio of chronic
daily intake to the reference dose.

While chronic daily intake (CDI) is calculated using the equation:

The description of the variables used is summarized in Table 3. CSF and RfD were obtained by back-calculating the published unit risk and reference concentration values from U.S. EPA (U.S. EPA, 2017) based on the standard adult inhalation rate (20 m3 day–1) and lifetime (70 years) (Sofuoglu et al., 2011), except for isoprene (Haney et al., 2015). Table 4 lists the CSF and RfD.

Hamoda (2006) investigated the presence of VOCs and other gaseous pollutants such as methane, ammonia, and hydrogen sulfide in air surrounding municipal wastewater treatment plant in the State of Kuwait. In some cases the concentration exceeded the air quality standard. Lee et al. (2007) investigated the air quality of four wastewater treatment plants in Iowa, USA by monitoring the levels of hydrogen sulfide. The result show that the geometric means of hydrogen sulfide was less than 1 ppm.

The locations of potential source of VOCs were identified using surfer program to plot seasonal concentration distributions. The concentration distribution of TVOCs for every seasons can be seen in Fig. 2. From Fig. 2, it can be seen that higher TVOC concentrations for each of the four seasons were distributed over the Sampling area A, which was surrounded by Y. N. Road, J. Street, and H. N. Road in the east, south, and west side, respectively. On the sampling area A, a car park can be found. Benzene and toluene ratio (T/B) has been widely used as a simple method for evaluating the vehicle exhaust contribution to aromatics (Nelson and Quigley, 1984). T/B less than 2.0 indicated that aromatics were significantly influenced by vehicle emissions (Wang et al., 2016a).

From Table 2, it can be seen that the average concentrations of toluene and benzene were 4.64 µg m–3 and 10.4 µg m–3, respectively, therefore the T/B ratio obtained in the present study was 0.45, traffic influenced more. Ethanol yielded the highest mean concentration of VOCs followed by acetone and isopropyl alcohol. Based on Table 2, the highest total of the VOCs appeared in spring because spring is a favorable season for tourism. Photochemical removal and dilution are weak because of the lower temperatures. Therefore, VOCs accumulates and the highest value appears in this season. Emission sources present in autumn are lower than those in summer and the effects of photochemical removal and dilution are still strong. Therefore, the lowest values of VOCs appeared in autumn (Zhang et al., 2014). As shown in Fig. 3, the highest concentration and contribution of VOC groups was alkane then followed by alcohol and aromatics with concentration 50.7 µg m–3, 47.6 µg m–3 and 34.9 µg m–3, respectively. Fig. 3. (a) Concentration and (b) contribution of seven groups of VOCs.

According to the International Agency for Research on Cancer (IARC), three of the investigated VOCs are classified into two carcinogenic categories: group 1 (the agents is carcinogenic to human such as benzene) and group 2B (the agents is possibly carcinogenic to humans such as isoprene and methylene chloride). From Table 4 one compound (benzene) was regarded as possible risk and two other compounds (isoprene and methylene chloride) were regarded as negligible or insignificant risk, and the cumulative of LCR was categorized as possible risk. Therefore, the provision of air pollution control is required to decrease the level of air pollutants. The identification of the air pollutant sources is the initial step in order to select the technology of air pollution control.

For the non-carcinogenic risk, HI greater than 1, the compound concentrations were considered to be above the level of concern (Ramírez et al., 2012). Otherwise, it is assumed that the risk is at acceptable level (Biesiada, 2001). Nevertheless, for HI greater than 0.1 and lower than 1, the compounds were considered to be a potential risk to the residents health (McCarthy et al., 2009). Table 4 shows the highest risk for non-carcinogenic originated from 1,2,4-trimethylbenzene. However, the cumulative of non-carcinogenic risk was less than 1 and considered unlikely to affect the residents.

One factor that affects the uncertainty of health risk assessment is VOCs concentration. However, the uncertainty was not analyzed in the present study due to the limitation in sampling size (Table 2). When the number of samples of VOCs is limited, then the distribution of VOCs concentration can not be accurately showed, which makes it difficult analyze the uncertainty. In future studies, the accuracy of the health risk assessment can be improved by considering a large size of samples.

Twenty four VOCs species, TVOCs, and some prominent air pollutants (CO, CO2, NH3, H2S, PM1, PM2.5, PM7, PM10, TSP) were identified from municipal wastewater treatment plant A. Some VOCs were categorized as carcinogenic to humans (Group 1) and possibly carcinogenic to humans (Group 2B) according to the IARC. According to the results of this study, higher concentrations of TVOCs were in the sampling area A which was surrounded by three streets in the west, south, and east side. The carcinogenic risk for the residents was categorized as possible risk with value 3.48 × 10–5. In addition, the hazard index value was 6.47 × 10–4 and considered unlikely to affect the residents.