The electrostatic precipitator (ESP) is a well-known, highly efficient device for cleaning exhaust gases from industrial processes (Wang et al., 2015; Sun et al., 2018; Yang et al., 2018a). The overall mass-based collection efficiencies of ESPs can exceed 99% (Xu et al., 2016a, b). However, a decrease in collection efficiency was observed for different kinds of particles with the reduction in particle size to between 0.1–l µm (Zhuang et al., 2000). One important reason for the decrease is the low charging efficiency of fine particles (Lawless, 1996). Studying the charging mechanism of particles is useful for enhancing the charging efficiency. Different numerical techniques, theoretical models, and experiments have been proposed and developed to elucidate the charging mechanism of particles.

Numerical techniques have been adopted by researchers to analyze particle charging to model unipolar chargers. The Monte Carlo simulation was developed to capture the charging characteristics of particles with complex shapes (Biskos et al., 2004). Apart from the Monte Carlo simulations of theoretical charging processes, numerical techniques were also developed to analyze the charging process in unipolar chargers. A 2D numerical model was developed to predict the charging process in real unipolar chargers with complex geometries, which contain the fully coupled calculation of the flow, electric potential, and ion concentration fields and the charging dynamics of particles (Chien et al., 2011; Chien and Tsai, 2013). In the aspect of theoretical models, a non-spherical particle charging model for particles of all sizes and a charge distribution model for particles sized 0.01–10 µm were developed in recent years (Gopalakrishnan et al., 2013; Domat et al., 2014). Many measurements of electric charges were developed to confirm the validity of the field charging model. Frank et al. (2004) measured the electric charge on droplet particles sized 0.1–20 µm by using three different methods. The average charges were fairly consistent with the prediction of the combined charging model of Lawless (1996). Long and Yao (2010) analyzed different kinds of charging models in the continuum regime and compared their data with the experimental data (Hewitt, 1957), which indicated that the model established by Lawless should be the first choice for modeling the particle charging dynamics in ESPs. The effect of the dielectric constant of materials on the unipolar diffusion charging of nanoparticles was also investigated (Shin et al., 2009). Xu et al. (2009) investigated the effect of power supply with different frequencies and different particle flow rates on particle charging. Park et al. (2011) used multichannel chargers to demonstrate that increasing ion concentration is an important factor in increasing the average charge of the particles. Another new charger (Alonso and Huang, 2015) was also designed to enhance the nanoparticle charge.

Although many experiments were conducted, most of them mainly focused on the effects of the charge devices, particle sizes, and ion concentrations on the particle. How to adjust the actual operating conditions of the ESP and the main particle component to enhance the particle charge is unclear (Zheng et al., 2016). In this research, a particle charge measurement system was designed to study the effects of particle properties, flue gas parameters, and discharge electrodes on particle charge. The temperature varied from 293 K to 383 K, and the range of relative humidity was 0–100%, which were aimed at how to improve the efficiency of ESP under real operating conditions. The effects of different discharge electrodes, including ribbon electrode, sawtooth electrode, screw electrode, and two wire electrodes (d = 1, 3 mm), on particle charge were compared. Six types of particles, namely, power plant fly ash (Ash A), coal pyrolysis furnace fly ash (Ash B), glass bead (Particle C), silica (Particle D), aluminum oxide (Particle E), and calcium oxide (Particle F), were investigated. This research mainly aimed to study how the main particle component, flue gas parameters, and discharge electrodes influence the charging mechanism of particles and to obtain the method of enhancing the particle charge.

A schematic of the experimental system is shown in Fig. 1. The system consisted of five parts, namely, a gas-controlled system, particle feeders, a particle charging device, a high-voltage power supply, and a particle charge measurement system. Fig. 1. Schematic of the experimental system.

The gas-controlled system consisted of a fan, a buffer vessel, an electric heater, and a rotameter. The main stream of simulated flue gas was produced by a draught fan from the air with a maximum flow rate of 70 L min–1 during the experiments. The buffer vessel was a cylindrical metal barrel, with a diameter of 20 cm and a height of 40 cm, connected to the middle of the pipeline linked to the feeder and the charging system. This configuration prevented excess particles from depositing in and blocking the pipes and aimed to adjust the flow rate. The relative humidity of the gas, which ranged from 0% to 100%, was measured by an electronic hygrometer (CX309; Anseny, Ltd., China). The gas temperature was controlled in the range of 293 K to 383 K by an electric heater. The temperature of these experiments was generally 313 K, apart from the experiments aimed at exploring particle charging characteristics at different temperatures. All pipes were covered with thermal insulation material to reduce undesired heat loss. In addition, the designed pipelines in were as straight and short as possible to reduce the mass loss. Then, the gas entered the charging system. The charging time varied in the range of 0.06–0.1 s by changing the gas flow rate using the rotameter. Afterward, the particle charge and concentration were measured at the outlet of the particle charging system. The measurement was taken when each experiment was adjusted to a stable condition as the experiment required. The time of each experiment was very short, usually within 2 minutes.

Six types of particles, namely, power plant fly ash (Ash A), coal pyrolysis furnace fly ash (Ash B), glass bead (Particle C), silica (Particle D), aluminum oxide (Particle E), and calcium oxide (Particle F), were used to study the charging characteristic of different particles. The experimental particle mass concentration and the number concentration were approximately 120 mg m–3 and 190,000 # cm–3, respectively. The experimental particles of these experiments were generally power plant fly ash, apart from the experiments aimed at exploring effect of the main particle component on particle charging. The particles were injected into the simulated flue gas by an electromagnetic vibrating feeder, which was self-designed and consisted of four springs and an electromagnet system. When the electromagnet was magnetized, the springs would be extruded and the base of the spring moved downward. The particles moved forward with the vibration of the base, then entered the inlet of the pipes through the connecting tube. The feeding rate could be adjusted in accordance with the vibration frequency of the vibration controller, of which the vibration frequency range was 0–100 Hz. The particle feeder was replaced by an aerosol generator (Condensation Monodisperse Aerosol Generator Model 3475; TSI Inc., USA) to study the particle charging characteristics at different temperatures. It can produce polydisperse aerosol particles with an average particle size of 0.1–8 µm, which are almost electrically neutral. The material it generated was bis(2-ethylhexyl) sebacate (DEHS) aerosol particles, which were generated by the DEHS vapor condensing on the sodium chloride crystal nucleus. In this research, the total mass and number concentration of the generated aerosol particles was approximately 120 mg m–3 and 233,843 # cm–3, respectively, which were controlled by adjusting the nitrogen pressure, saturator flow valve, temperature, and reheater temperature.

The particle measurement system consisted of an electrostatic low-pressure impactor (ELPI+; Dekati, Ltd., Finland), a vacuum pump (SV25B; Ernst Leybold, Ltd., Germany), and a sampling probe. The inside of the sampling probe was technically coated to prevent electrostatic adsorption, which can minimize the loss of small particles. Using the vacuum pump, the flue gas was sampled through the sampling probe at a flow rate of 10 L min–1. The particle charge and number concentration of particles of different sizes were obtained by the ELPI+. The measured size range of the particles was 0.006–10 µm, and these particles were classified into 14 stages. The particle number concentration of each stage was obtained by detecting the signal of the induced current. Fig. 3. Effect of temperature on particle. 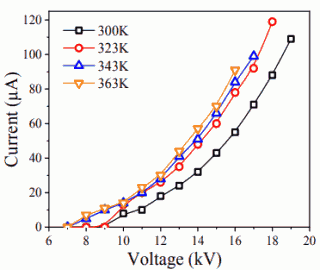 Fig. 6 shows the effect of temperature on particle charge at maximum applied voltages. For corona discharges above 323 K, the particle charge decreased with increasing temperature. The maximum applied voltage (Ghaleb et al., 2008; Ghaleb and Belasri, 2012), electric field strength, and ion concentration in the corona discharge region decreased with increasing temperature. Hence, the movement of ions to the surface of the particles and the collision frequency decreased, thereby resulting in a corresponding decrease in the particle charge. For 293 K to 323 K, the particle charge at 323 K was slightly higher than that at 293 K because the decrease in the maximum operating voltage was small. However, the accelerating effect of temperature on corona discharge was obvious. Therefore, the discharge current at 323 K was slightly higher than that at 293 K. The ion concentration also increased. For particles smaller than 0.5 µm, diffusion charging was stronger than field charging (Jaworek et al., 2007). With the increase of temperature, the diffusion charging will be much stronger. Therefore, the charge of particles less than 0.5 µm at 323 K was higher than that at 293 K. 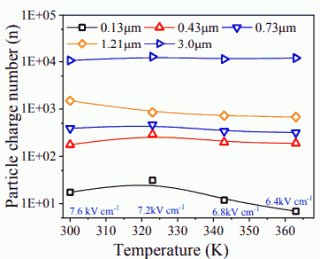 In this research, six types of particles, namely, power plant fly ash (Ash A), coal pyrolysis furnace fly ash (Ash B), glass bead (Particle C), silica (Particle D), aluminum oxide (Particle E), and calcium oxide (Particle F), were used to study the charging characteristic of different particles. Among these particles, Ashes A and B mainly consisted of silica, aluminum oxide, iron oxide, calcium oxide, and magnesium oxide. The main components of Particles D, E, and F were silica, aluminum oxide, and calcium oxide, respectively. The mass concentration of Ash/Particle A, B, C, D, E, and F was approximately 196, 91, 48, 149, 394, and 139 mg cm–3, respectively. The number concentration of Ash/Particle A, B, C, D, E, and F was approximately 182,489, 215,488, 208,578, 155,549, 210,959, and 233,843 # cm–3, respectively. During the experiment the particle mass and number concentration varied slightly around the set value. The particle charging characteristics of different main components under the conditions of 0.1 s charging time and 30% relative humidity are shown in Fig. 7. The particle charge under the same applied voltage was ranked in the order of F > E > A > B > D > C. As indicated by other researchers (Chełkowski, 1980), the relative dielectric constant of Particles C, D, E, and F are 4.3–5, 4.5, 9, and 11.8, respectively. In addition, X-ray fluorescence is used to detect the elemental compositions of Ashes A and B. For Ashes A and B, the relative dielectric constant is calculated using Eq. (3) (Rao et al., 2000): 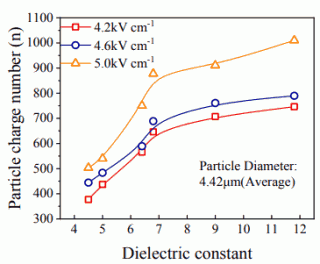 Effect of the Humidity in Flue Gas on Particle Charging 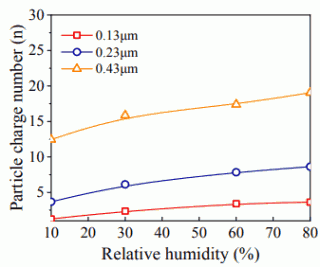 Optimization of the Selection of a Discharge Electrode 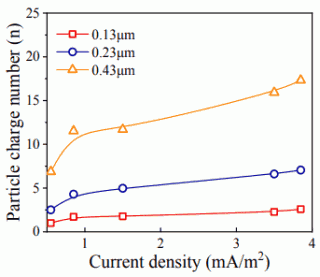 In this study, a particle charge measurement system was designed to study the effects of particle composition and flue gas parameters on particle charging. Based on the results, we present a series of methods for enhancing charging. The following conclusions can be drawn:

(4) Particle charging is affected by the type of discharge electrode. The ribbon electrode, which discharges the largest current, is the optimal choice for particle charging, followed by the sawtooth, screw, and wire electrodes (d = 1 or 3 mm). With an electric field strength of –4.2 kV cm–1, the ribbon electrode produces a charge of 70 e for 0.7 µm particles, which is significantly higher than that of the other electrodes.