Chongmin Lee1,2, Hankwon Chang1,2, Hee Dong Jang This email address is being protected from spambots. You need JavaScript enabled to view it.1,2

Cobalt-iron oxides have attracted much attention as electrode materials for supercapacitors. Graphene loaded with cobalt ferrite (CoFe2O4) nanoparticles can exhibit enhanced specific capacitance. Here, we present three-dimensional (3D) crumpled graphene (CGR) loaded with CoFe2O4 nanoparticles. The CoFe2O4-graphene composites were synthesized from a colloidal mixture of GO, FeCl3⋅6H2O, and CoCl2⋅6H2O by one step aerosol spray pyrolysis. The CoFe2O4-GR composites displayed a morphology resembling a crumpled paper ball, and the size of the CoFe2O4 and CGR in the composites was around 5 nm and 500 nm, respectively. The highest specific capacitance of the CoFe2O4-graphene composites was 253 F g–1.

Various methods, such as the vapor phase method (Soofivand and Salavati-Niasari, 2015), hydrothermal synthesis method (Liang et al., 2011), precipitation method (Li et al., 2010), solid phase combustion method (Rai et al., 2013), mechanochemical method (Sun and Lu, 2012) sol-gel method (Liu et al., 2012), and gas condensation method (Yermakov et al., 2013), have been attempted to obtain metal oxide-graphene composite powder. Among them, the liquid phase method is most widely used, and is known as a method capable of controlling the size of metal oxide nanoparticles. However, it is also known that the liquid phase method has a high manufacturing cost, and the ion diffusion behavior becomes poor due to severe aggregation of the graphene sheet, resulting in deterioration of the supercapacitor performance (Wang et al., 2012). In addition, since post-heat treatment of as-synthesized particles is required, the size of the particles increases due to the agglomeration of the metal oxide nanoparticles, which has to be solved. On the other hand, aerosol spray pyrolysis (ASP), which is a vapor phase method, has merits in that the process is simple and continuous compared with the existing process. ASP also supports the coagulation degree of the produced graphene being low, and the size of the produced nanoparticles can be maintained (Wu et al., 2012).

In this study, we synthesized graphene composite powders with CoFe2O4 oxide nanoparticles adhered to crumpled paper ball shape graphene by using ASP. The reaction temperature of ASP was chosen as a process variable for the preparation of the CoFe2O4-GR composite powder. The morphology and crystal phase of CoFe2O4-GR composites were observed by FE-SEM and XRD analysis according to the reaction temperature. The electrochemical performances of the CoFe2O4-GR composites were investigated by cyclic voltammetry (CV), galvanostatic charge/discharge (GCD), and electrochemical impedance spectroscopy (EIS).

Graphene oxide (GO) was prepared by a modified Hummers’ method and then dispersed in distilled water (Hummers and Offeman, 1958). The GO colloid solution and the metal precursor (FeCl3·6H2O, CoCl2·6H2O) were mixed while the GO concentration was 0.5 wt%, and the weight ratio of the metal precursor/GO was 0.3. The colloidal mixture was then sprayed and introduced into the tube furnace under conditions of a reactor temperature of 400°C and a flow rate of 10 L min–1 of the carrier gas to prepare a CoFe2O4-GR composite. A schematic diagram of the ASP process for preparing the CoFe2O4-GR composite is shown in Fig.1. The apparatus for fabricating the composite consisted of an ultrasonic atomizer for spraying the precursor, a tube furnace for synthesis of the composite, and a filter to collect products. An industrial ultrasonic atomizer contained six 1.7 MHz vibrators. In order to prevent the heat generated by the vibrator during the droplet spraying, cooling water was introduced at a constant flow rate (20 mL min–1), and the temperature was kept below 20°C. The tube furnace employed a cylindrical quartz tube with a diameter and length of 70 mm and 1400 mm, respectively. The GO and the metal precursor coexist in the micron-sized sprayed droplets generated from the colloid mixture of GO and metal precursor (FeCl3·6H2O, CoCl2·6H2O). As these droplcets pass through the tube furnace, water as a solvent inside the droplet evaporates, and self-assembly of the metal precursor and crumpling of the GO sheet occur. The ASP process can be mass- produced easily and quickly in a single continuous process at the time of producing the composite, and it has the advantage that a reducing agent is not needed because the GO can be reduced into GR by the heat applied when the CoFe2O4-graphene composites are fabricated. Therefore, GO and metal precursors (FeCl3·6H2O, CoCl2·6H2O) are simultaneously reduced and oxidized at predetermined temperatures, resulting in the formation of CoFe2O4 nanoparticles loaded with crumpled GR composites.

Fig. 1. Schematic illustration of the formation of CoFe2O4-graphene composites from colloidal mixture of metal precursor and graphene oxide via aerosol spray pyrolysis.

In order to evaluate the electrochemical performance of supercapacitors, the synthesized CoFe2O4-graphene composite powder was employed as an electrode active material, and polyvinylidene difluoride (PVDF) was used as a binder. The composite and PVDF powders were mixed in a weight ratio of 9:1 with N-methyl-2-pyrrolidone (NMP) solvent, followed by stirring for 20 minutes to prepare a slurry. The prepared slurry was coated on carbon paper by the Doctor Blade method, dried in an 80°C vacuum oven for 2 hours, and then the paper was cut with a diameter of 14 mm for each electrode. The supercapacitor cell was assembled using a two-electrode HS Flat Cell (Hohsen Corp., Japan) with a separator (GF/C, Whatman).

In order to observe the morphology of the CoFe2O4-GR composites prepared in this study, field-emission scanning electron microscopy (FE-SEM; Sirion, FEI) and X-ray diffractometry (XRD; RTP 300RC, Rigaku) were used to measure the morphology and the crystal phase of the composite, respectively. Cyclic voltammetry (CV), galvanostatic charge/discharge (GCD), and electrochemical impedance spectroscopy (EIS) were measured using a potentiostat (VSP, Bio-logics) to evaluate the electrochemical properties of the supercapacitor electrode composed of CoFe2O4-GR composite. The electrochemical characteristics were measured by scanning a potential range of –0.2 to 0.8 V using a two-electrode system under a 5 M KOH electrolyte. From the charge/discharge behavior measurement, the specific capacitance (C) was calculated based on the discharge process of the electrode.

Eq. (1) for the calculation of the non-volatile capacity is as follows:

where I is the current (A), m is the weight (g) of the CoFe2O4-graphene composite powder, ΔV is the potential range (V) during the discharge process, and Δt is the discharge time (s) (Mastragostino et al., 2002).

Fig.2 shows the SEM images of the CoFe2O4-GR composite powders prepared by ASP. SEM images showed that the CoFe2O4-graphene composite prepared in Ar atmosphere appeared as three-dimensional crumpled morphology, and the average particle size was about 600 nm. It was also confirmed that CoFe2O4 nanoparticles having a size of about 5 to 10 nm adhered to the surface of the crumpled paper-like graphene. As the reaction temperature increased, the size of the CoFe2O4 nanoparticles deposited on the graphene surface increased. The size distribution of CoFe2O4-graphene composites calculated from the SEM images is shown in Fig. 3. The average particle size of CoFe2O4-graphene composite decreased from 760 nm to 540 nm as the reaction temperature increased from 300°C to 500°C. The size of the composites can be tuned by capillary force applied to GR in the sprayed droplets while solvent evaporated. Then, high capillary force originating from the high temperature could form crumpled morphology of composites with smaller size. Fig. 4 shows the results of XRD analysis of the CoFe2O4-graphene composite prepared by the ASP process. The peak intensity corresponding to the cobalt ferrite crystal phase increased with the increase of the reaction temperature. The broad peaks near 23.5° and 42.9° are considered to be peaks corresponding to the typical graphene crystal type with the graphite peak shifted to the left. As the reaction temperature increased, the XRD peak corresponding to graphene showed a shift to the left of the graphite peak. This is because the cobalt ferrite nanoparticles introduced into the graphene surface increased the interlayer spacing as well. 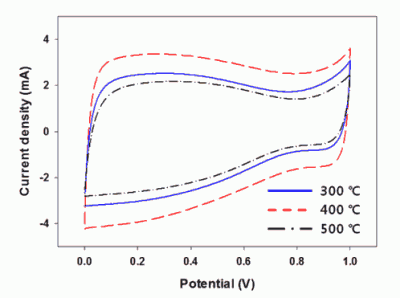 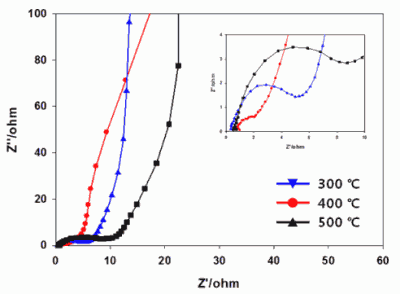 We successfully synthesized a CoFe2O4-graphene composite powder using the ASP process. FE-SEM analysis revealed that the composites were shaped like three- dimensional crumpled particles, and the degree of wrinkling increased with the reaction temperature. The crystal phase of the metal oxide nanoparticles adhered to the graphene surface was identified as cobalt ferrite (CoFe2O4), and the crystal size increased as the reaction temperature increased. As a result, the electrode fabricated with CoFe2O4-graphene composites at 400°C was found to have the highest specific capacitance, 253 F g-1, and a rate capability of 80.5% at a current density of 4 Ag-1. Overall, a nanocomposite electrode of CoFe2O4 nanoparticles and graphene improves the electrochemical characteristics of electrostatic capacity and charge/discharge efficiency in a supercapacitor by increasing the ion and electric conductivity. Based on these results, CoFe2O4-GR composite powder is a promising new supercapacitor electrode material.