A multiwall carbon nanotube/graphene (MWCNT/GR) composite was synthesized for an enhanced supercapacitor. Aerosol spray drying (ASD) was used to synthesize the MWCNT/GR particles using a mixture of graphene oxide (GO) solution and MWCNT. The effect of the MWCNT/GO ratio on the properties of the composite, including its shape and structure, was investigated. The composite particles were generally shaped like a crumpled paper ball, with an average diameter of approximately 5 µm. The MWCNTs, which were uniformly dispersed among the graphene sheets, not only increased the basal spacing of the sheets but also bridged the wide gaps between them, thereby improving electron transfer between the layers. Thus, the MWCNTs increased the contact area of the electrolyte/electrode and facilitated the transportation of electrons and electrolyte in the electrode. Using a two-electrode testing system, the electrochemical results demonstrate that the MWCNT/GR (weight ratio = 0.1) electrode has a capacitance of 192 F g–1 and an excellent rate of capacity retention (88% at 4 A g–1).

As the demand for energy storage systems with higher energy and power density has increased, supercapacitors have attracted much attention as a next-generation eco- friendly energy storage device. These supercapacitors have higher power density and higher charge/discharge efficiency than conventional secondary batteries, as well as semi- permanent cycle life and a low risk of explosion because they are stable to current changes. Therefore, supercapacitors are largely used as power supplies for instantaneous acceleration with motors and memory backup of personal electronic devices, supplementary batteries, and electric vehicles that require stable energy supply (Frackowiak and Beguin, 2001; Miller and Simon, 2008).

Recently, structural approaches to increasing the performance of graphene capacitors have been reported (Luo et al., 2013; Zhang et al., 2013). However, these electrodes have lower volume capacitance than conventional activated carbon electrodes due to the severe stacking of graphene in the electrode. As an approach for improving the volume capacitance of the supercapacitor, many works have been carried out on the production of graphene composites including carbon materials such as CNTs and activated carbon (Lu et al., 2011; Huang et al., 2015). However, as re-stacking and agglomeration occur between the graphene sheets of the two-dimensional structure, the electrolyte is not able to effectively penetrate the composite electrode. In addition, the assembly of carbon nanotubes by Van der Waals attraction limited the excellent electrical conductivity and unique pore structure, which tended to decrease the specific capacitance value with increasing current. To overcome these problems, it is necessary to enhance the capacitance value and power density with high current density.

Here, we introduce a 3D multiwall carbon nanotube/graphene (MWCNT/GR) composite as the electrode for high-performance supercapacitors. Using aerosol spray drying, the MWCNT/GR composite was prepared from graphene oxide (GO) and MWCNT mixtures. During preparation, MWCNT served to reduce the degree of aggregation of the GO layers during configuration of the 3D structure of MWCNT/GR composites. In particular, MWCNTs loaded on the edges and on the surface of the graphene layers are expected to accelerate the electrolyte accessibility due to enhancement of the electrical conductivity and to an increase in the layer spacing by cross-linking the graphene sheets. We analyzed the properties (morphology, interlayer spacing, defects) of MWCNT/GR composites using SEM, TEM, and Raman analysis according to the mixing ratio of GO and MWCNT. Then, we examined the electrochemical properties such as the specific capacitance and the rate capability of the as-fabricated MWCNT/GR electrodes for supercapacitors.

The graphene oxide (GO) was synthesized by the oxidation of graphite using the modified Hummers’ method (Hummers and Offeman, 1958; Cote et al., 2009). The functionalization of MWCNTs was conducted using an earlier reported method (Byon et al., 2011) to increase the dispersion of MWCNT (> 95% purity; NanoLab, Inc.) in deionized water. 1 g of MWCNTs was dispersed in a mixed solution of 150 mL of H2SO4 (99.5%) and 50 mL of HNO3, followed by stirring at 70°C for 2 h. Thereafter, it was filtered and washed with 5% HCl solution, and then dried in air. Acid-treated MWCNTs and GO were mixed at a weight ratio of 0.01 to 0.5 to prepare starting solutions. The concentration of GO in the colloidal mixture was fixed at 0.25 wt%. The MWCNT/GO composites were prepared using an aerosol reactor equipped with air flow nozzles, and the schematic illustration of the reaction is displayed in Fig. 1. This aerosol reactor is composed of a two-fluid nozzle for the injection of the starting solution, a drying chamber, a bag filter, and a cyclone collector. The starting solution was sprayed into a drying chamber kept at the temperature of 200°C. The as-dried sample was collected using a series of a cyclone and a bag filter. As-prepared MWCNT/GO composites were then further heated at 250°C for 2 h in an argon atmosphere.

Fig. 1. Schematic illustration of the formation of MWCNT/GR composite from a colloidal mixture of MWCNT and GO via aerosol spray drying.

Preparation of the Supercapacitor Assembly

To examine the electrochemical performance of the supercapacitors, we first made an electrode using polyvinylidene difluoride (PVDF) as binder and MWCNT/GR composites as active electrode materials. The weight fractions of the composite and PVDF were maintained at 90 and 10%, respectively. A mixture of composite and PVDF was stirred for 20 min while adding N-methyl-2-pyrrolidone (NMP) to obtain uniform slurry mix. The mixture was then pasted onto carbon paper 10 μm thick using the doctor blade method and then dried under vacuum at 80°C for 2 h. After drying, the paper was cut to form a circle with a diameter of 14 mm for a cell that weighed 5 mg. The supercapacitor cell was assembled using a two-electrode HS Flat Cell (Hohsen Corp., Japan) with a separator (Whatman Grade GF/C Glass Microfiber) between it and the electrolyte (5M KOH). The XRD results of the MWCNT/GR are exhibited in Fig. 3. The XRD peaks of the MWCNT/GR composites exhibit two diffraction peaks at 2θ = 23.5° and 42.9° or 2θ = 26.4° and 42.9°, indicating the co-existence of graphene sheets and MWCNTs. The peak of GO at 10° was not observed in the XRD patterns of composites, suggesting that the reduction of GO was performed well during preparation of the composite. The peaks of MWCNT/GR composites in the XRD patterns became broad and shifted left compared to the GO peak, which indicates loosely stacked graphene and increase in the interfacial spacing by the interaction of MWCNTs in the composite particles. The interlayer spacing (calculated from Bragg’s law) of MWCNT/GR composites with weight ratios of 0.01, 0.05, 0.1, and 0.5 was 0.37, 0.37, 0.36 and 0.34 nm, respectively (see Eq. (1)) (Lu et al., 2011):

where d is the interplanar distance, θ is the degree of diffraction, and λ is the wavelength of incident ray, n is an integer. 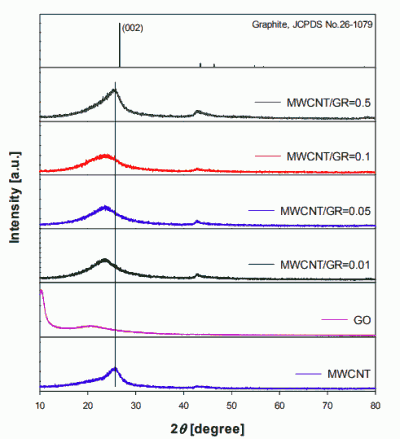 Fig. 4 presents the Raman scattering spectrum of the MWCNT/GR samples. For the as-synthesized composites,D-band and G-band of graphene were confirmed at 1350 and 1600 cm-1, respectively. The D-band is related to the disorder that arises from sp3 atom or other contaminant, while the G-band expresses the sp2 carbon atom of graphite. The ratio of intensity of D-band and G-band (ID/IG) was generally considered to represent the amount of disordered carbon relative to graphitic carbon. The ID/IG ratio of the composites decreased as the weight ratio of MWCNT/GO increased. It is considered that defects in the composite were reduced as the MWCNT content increased. 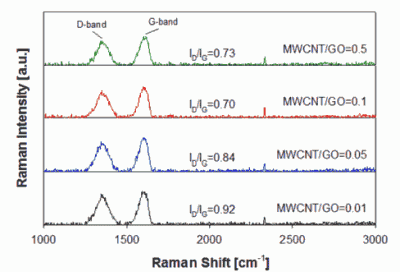 To acquire further insight into the effect of various contents of MWCNTs on the electrochemical performance, we prepared supercapacitors in a symmetrical two-electrode system. Fig. 5(a) provides the CV (cyclic voltammetry) of different samples, obtained at a scan rate of 10 mV s-1. The. CV curves of MWCNT/GR electrodes were all close to an ideal rectangular shape, with no obvious redox current peak, over the range 0–1.0 V, indicating standard EDLC (electrical double layer capacitor) behavior. The rectangular shape expanded with increase of the MWCNT/GR weight ratio from 0.01 to 0.1, which indicated that the electrode’s specific capacitance was enhanced. It was thought that the introduction of MWCNTs induced an increase of interlayer spacing between graphenes, which better enabled the electrolyte ions to penetrate to the surface of the electrode material. On the other hand, when the weight ratio of MWCNT/GO is 0.5, it is considered that the aggregation between the MWCNTs rapidly reduced the interlayer spacing of the graphene. This seems to have affected the specific capacitance as well as slowing the ion transfer rate of the electrolyte. Fig. 5. Electrochemical properties of electrodes prepared with different MWCNT/GR composites: (a) CV curves recorded at a scan rate of 10 mV s–1; (b) Galvanostatic charge/discharge curves at a current density of 2 A g–1; (c) Specific capacitance variation at different current density; (d) Nyquist plots of these electrodes.

On the other hand, an impedance test was conducted to investigate the interface resistance into the electrode/ electrolyte. As the weight ratio of MWCNT/GO increases, the bulk resistance (the intercept value of the Z-axis in Fig. 5(d)) is similar except at the MWCNT/GR ratio of 0.5. However, the interfacial resistance (the semicircle’s diameter in the Nyquist plot) decreased with increasing MWCNT content. This is because the fast electrical conductivity of the MWCNTs decreased the resistance of the electrode. In addition, the increase in the interlayer spacing between the graphene layers highly increased the contact area of the electrolyte, thereby greatly reducing the interfacial resistance.

In this study, an MWCNT/GR composite fabricated by drying aerosol spray was used to improve the stability of the power density of supercapacitors. The as-prepared composite was a powder composed of 3D spherical particles with an average size of 5 μm and was uniformly dispersed among the graphene layers. Investigating the performance of the EDLC made from the MWCNT/GR composite revealed that the highest specific capacity, 192 F g-1, was achieved with an MWCNT/GO weight ratio of 0.1. Therefore, we consider that the introduction of MWCNTs into graphene sheets can improve properties such as the electrical conductivity, penetration of electrolyte ions, and interlayer spacing of the sheets. In particular, the ability to maintain a high specific capacitance at high current densities is due to the fact that MWCNTs efficiently form cross-linking points within the graphene sheets. In addition, it is thought that the pores in the three-dimensional MWCNT/GR composite reduced the interfacial resistance between the electrode and the electrolyte.