Laser-induced breakdown spectroscopy (LIBS) has been increasingly used in recent years to rapidly detect the elemental compositions of various materials in different media (i.e., solids, liquids, and gases). In this study, an aerosol-LIBS system was developed for the real-time monitoring of process-induced particles generated during semiconductor manufacturing. The developed system consists primarily of a laser, a spectrometer, optics, and an aerosol chamber; the last element was constructed for the application of the aerosol-LIBS to various semiconductor manufacturing processes and comprises exhaust tubes and low pressure and high temperature chambers. The system was evaluated for its sensitivity to various elements using laboratory-generated aerosols and successfully detected P, Fe, Mg, Cu, Co, Ni, Ca, Na, and K emission lines. Further evaluation of the aerosol-LIBS is ongoing.

It has been reported that the worldwide revenue generated by semiconductor sales amounted to $333 billion in 2016 (Parketal.,2018),andmarketcompetitionisexpectedto gradually intensify as a result of recent growth in the electronic devices industry, which has flourished with the increased popularity of mobile phones and tablet PCs (personal computers) (Chik et al., 2010).

Various process-induced particles are generated during the semiconductor manufacturing process (Baltzinger and Delahaye, 2010; Lee and Yook, 2015), and these are responsible for approximately 75% of the total defects observed in semiconductor products (Park et al., 2018). To minimize the occurrence of defective products, the development of a real-time chemical element detection system, to detect any contaminant particles generated, is recommended, where information on the elemental compositions of any such particles is likely to be useful in revealing their sources and the mechanisms by which they are formed during the semiconductor manufacturing process (Lee et al., 2018).

For the purposes of this study, a newly developed aerosol-LIBS system was used for the real-time monitoring of various process-induced particles generated during the semiconductor manufacturing process.

Various laboratory-produced particles were used to examine the performance of the aerosol-LIBS developed for this study. Table 1 summarizes the experimental conditions required for aerosol generation. As may be observed, a variety of standard solutions (Sigma-Aldrich, USA) were prepared in deionized (DI) water that contained the elements P, Fe, Mg, Cu, Co, Ni, Ca, Na and K. Fig. 1 presents a schematic diagram of the aerosol-LIBS system. Aerosols were generated using an atomizer, and the droplets were dried out as they passed through a series of diffusion dryers. Subsequently, aerosols of specific sizes (nm) were selected using a differential mobility analyzer (DMA 3080; TSI Instruments; Shoreview, MN, USA) and their number concentrations (cm–3) were monitored in real time using a condensation particle counter (CPC 3022a, TSI Instruments) (i.e., using a scanning mobility particle sizer). The aerosol- LIBS system comprises primarily a laser, a spectrometer, optics, and an aerosol chamber. The aerosols generated were introduced into the LIBS chamber, and the spectral data obtained through the application of the aerosol-LIBS were subsequently analyzed.

The aerosol-LIBS system was developed to facilitate its selective operation in either free-firing mode (Park et al., 2009) or triggering mode (Maeng et al., 2017). The free- firing mode can be operated in accordance with a relatively simple configuration. In this mode, aerosols are randomly ablated and then analyzed under laser firing at constant repetition rate (1–10 Hz). For triggering mode, however, a continuous wave (CW) laser and a photomultiplier (PMT) are installed in addition to the fundamental LIBS system required for free-firing mode. In triggering mode, a scattering signal is detected, which is generated when the aerosol is introduced into the chamber and passes through the CW laser. A superior hitting rate (i.e., the number of aerosols hit by pulse laser per time) may be achieved by irradiating the pulse laser with the relevant particles according to their arrival time. This is estimated by calculating the time of arrival at the sensing point, where the pulse laser is focused on the chamber and the plasma is generated. In this paper, we present the detection properties of LIBS in free-firing mode with a newly developed portable chamber.

For this study, a portable aerosol-LIBS chamber for exclusive operation in free-firing mode was developed because of its ease of installation and operation in practical application, its compatibility with various lasers, and its ease of attachment and detachment to and from the spectrometer optical cable. A sheath air-focusing nozzle was used to direct the aerosol flow toward the center of the chamber (Fig. 2). 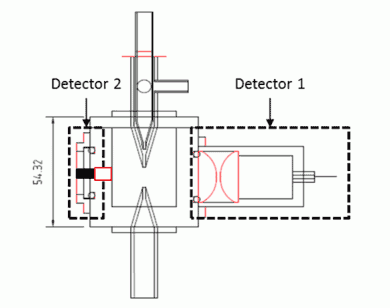 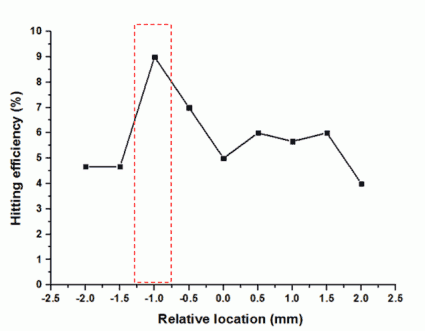 To evaluate the simultaneous multi-element detection properties of the aerosol-LIBS system, aerosols using standard solutions of P, Fe, Mg, Cu, Co, Ni, Ca, Na, and K were generated. The number concentration and size distribution were determined by scanning mobility particle sizer (SMPS), and a mode diameter of around 100 nm (CaCl2) was detected (Fig. 4). 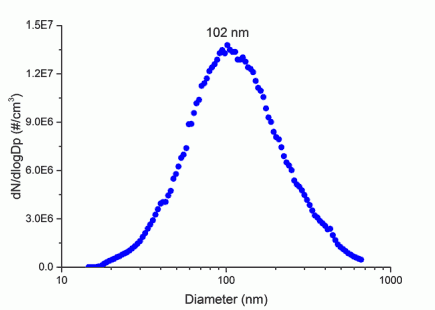 Analysis of the LIBS system was affected by sampling the laboratory-produced particles in the portable aerosol- LIBS chamber. Consequently, the emission lines (with a 100-shot average), which were not observed in the aerosol- free blank sample obtained from the HEPA filter, were formed as in Fig. 5. The data revealed that the P, Fe, Mg, Cu, Co, Ni, Ca, Na, and K emission lines were detected in real time, in alignment with the element compositions detected in various laboratory-produced particles. The portable aerosol-LIBS chamber (Fig. 2) consists of two detectors. Detector 1 was designed to have a detection efficiency higher than that of Detector 2 by collimating and focusing the light emitted from the laser-induced plasma using two 30 mm focal length plano-convex lenses with diameters of 25.4 mm. Detector 2 was coupled with a collimating lens (74-UV; Ocean Optics Inc., USA) with a focal length of 10 mm (diameter = 5 mm). In comparison to Detector 1, it required less space in terms of its design structure. As such, either Detector 1 or Detector 2 could be used selectively, depending on the detection sensitivity and space required for the installation. To determine whether the appropriate detection efficiency could be attained, in line with the design/production purposes mentioned above, we compared the emission lines of the laboratory-produced particle elements according to the different detectors under the same conditions (polydispersed aerosol number concentration: 20,000 ± 1,600 cm–3). The results are presented in Fig. 6. Fig. 6. Comparison of the LIBS peak areas between the two different detector systems.

The bar graph in Fig. 6 represents the mean value of the peak area of each element, obtained by analyzing 100 spectra, while the error bar indicates the standard deviation. For the peak area mean values of Mg, Cu, Ca, Na, and K, a scale adjustment was necessary for comparison with the average values of the other elements. The value divisions are shown separately in parentheses. Although the detection efficiency varied according to each element (ranging from 1.1 to 3.9), the efficiency of Detector 1 was found to be higher than that of Detector 2 with regard to all elements, without exception. We measured the hitting rate in accordance with a number concentration of 200 nm CaCl2 aerosol particles, using the relatively higher detection efficiency of Detector 1. The results are presented in Fig. 7.

Based on the real-time detection results of various elemental components (P, Fe, Mg, Cu, Co, Ni, Ca, Na, and K), this study verified the potential of the LIBS technique for real-time monitoring of process-induced particles generated during semiconductor production. Identification of the chemical composition of contaminative particles in real-time may help to identify the source of such particles, thereby minimizing the occurrence of defective products. The aerosol-LIBS can be used in either free-firing mode or triggering mode, depending on the operational environment and purpose. The performance of the free-firing mode, as tested in this study, indicates that it can be easily used for practical application with a relatively simple measurement system configuration, and the detectors are constructed so that they can be selectively used according to the sensitivity requirements and installation. Various experiments aiming to optimize the analytical system and improve its performance are ongoing, with the goal of applying the aerosol-LIBS technique during the semiconductor production process.

This work was supported by the National Leading Research Laboratory program (NRF- 2016R1A2A1A05005532) funded by the Ministry of Science, ICT, and Future Planning (MSIP) and also partially supported by Samsung Electronics.