Using NASA’s Modern-Era Retrospective Analysis for Research and Applications, version 2 (MERRA-2) reanalysis for aerosol optical depth (AOD) and satellite-observed carbon monoxide (CO) data, we examined the basic pattern of AOD variations over the three polar stations of Korea: the Jangbogo and King Sejong stations in Antarctica and the Dasan station in the Arctic. AOD values at the King Sejong and Dasan stations show maximum peaks in spring and appear to be associated with large amounts of atmospheric CO emitted from natural burning and biomass burning. The Jangbogo station shows a much lower AOD than the other two stations and does not appear to be strongly affected by the transport of airborne particles generated from mid-latitude regions. All three polar stations show an increasing trend in AOD in general, indicating that the polar background air quality is becoming polluted. 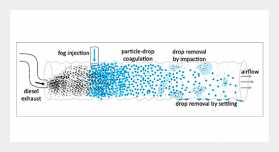 Chemical Composition, Source Appointment and Health Risk of PM2.5 and PM2.5-10 during Forest and Peatland Fires in Riau, Indonesia Quantification of Malondialdehyde in Atmospheric Aerosols: Application of the Thiobarbituric Acid Method