China both produced and consumed a large amount of coal every year. In 2016, about 2.6 billion tons of coal were consumed in China, which accounted for 62.0% of national primary energy source (National Bureau of Statistics of the People’s Republic of China; http://www.stats.gov.cn/tjsj/ndsj/). Emissions from coal burning are important anthropogenic sources of particulate and gaseous pollutants in the atmosphere (Chen et al., 2015; Li et al., 2016a; Cai et al., 2018). Coal contains many potentially harmful substances (Shao et al., 2016; Finkelman and Tian, 2018). During the coal burning process, the harmful substances can be released into the air, causing adverse effect on environment and significantly influence human health (Zhang and Smith, 2007; Pian et al., 2016).

Knowledge of detailed physical and chemical characteristics of coal burning-derived fine particles has important significance in the field of explaining the mechanism of high lung cancer incidence in Xuanwei (Lu et al., 2017). To our knowledge, there is few information available for revealing the evolution of individual fine particles throughout the different burning stages in Xuanwei. In this study, a set of chamber dilution measurement system was set up and the individual fine particles in different burning stages of Xuanwei coal were collected; characteristics of individual particles were analyzed by using transmission electron microscopy (TEM) with energy dispersive X-ray spectroscopy (EDX).

Fig. 1 shows the coal burning-dilution chamber measurement system used for generating coal-burning particles. The whole sealed room was ~10 m3 and at the center of the room installed a household stove sized 460 × 410 × 985 mm (NS18-17, 18 kW; Laowan Company; Beijing, China). The stove has a thermal efficiency of more than 70%. The air was filtered and then pumped into the sealed room. The filtered PM mass concentration was less than 1 µg m−3, which was negligible compared with the high PM levels during coal burning. Emissions from the stove are diluted with the filtered air in the sealed room and drawn into a circular pipe. The cold water entered the stove wall and then hot water flowed out to simulate a water heating process. 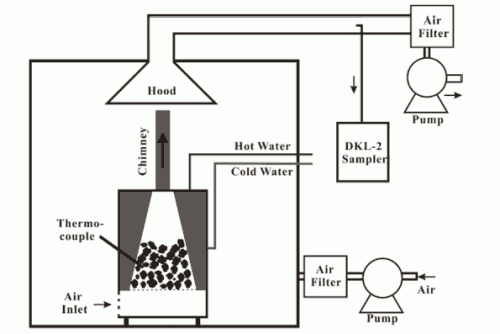 Hitachi H-8100 TEM (Hitachi, Ltd.; Tokyo, Japan) was used to analyze the individual fine particles and the accelerate voltage was 200 kV. EDX was used to semi-quantitatively acquire the elemental composition with an acquisition time ~30 s and the elements with atomic number higher than 6 can be detected. Copper was not included in our analysis because the TEM grids were made of Cu (Wang et al., 2018).

Soot particles were mainly composed of C and O. They showed distinct chain-like (Fig. 2(a)) or aggregate morphologies (Fig. 2(b)) with hundreds of C-rich spheres, which displayed an onion-like structure with disordered graphic layers under high resolution TEM images (Fig. 2(c)). 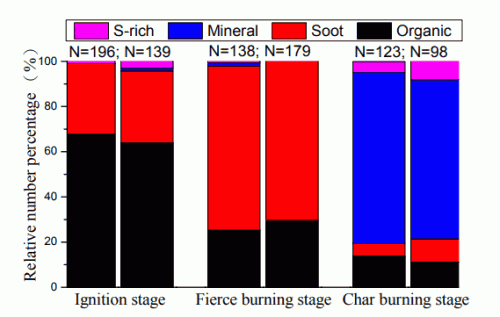 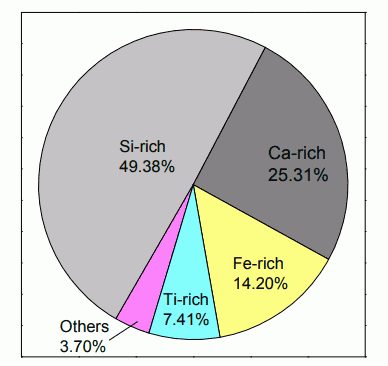 Formation of Carbonaceous Particles in Ignition and Fierce Burning Stages

In the ignition and fierce burning stages, coal chunks undergo pyrolysis and generate a high number of organic volatiles and most of them are burned completely, forming H2O and CO2 (Zhou et al., 2016; Li et al., 2017). However, a small number of the volatile matters are not oxidized or partially oxidized, forming organic aerosols (Wang et al., 2015). Some of the gas phase high-molecular-weight hydrocarbons, such as PAHs can undergo nucleation, condensation or polymerization reactions in very short time periods of ~5 ms to compete with oxidation in the absence of oxygen, forming soot particles (Ma et al., 1996; Fletcher et al., 1997; Richter and Howard, 2000; Mansurov, 2005; Apicella et al., 2017; Xiao et al., 2017). Therefore, the coal pyrolysis product escaped from the burning region and formed either organic or soot particles in the exhaust.

Only a few of mineral particles were found in the first two burning stages. They may come from the soil dust coated on the surface of the coal when stored and transported or emit from the inner coal chunks along with the emission of pyrolysis product.

Non-Carbonaceous Particles Influenced by the Composition of Coal

The volatile materials of coal have been mostly consumed in the first two burning stages, and the char burning became dominant in the following stage (Zhou et al., 2016). During the coal burning process, the minerals in coal were partially deposited as bottom ash and partially emitted into atmosphere (Lu et al., 2016). With the decreasing of volatile content, mineral particles were dominant in the char burning stage and the type of mineral particles were related with the mineral composition of coal chunks.

The elemental composition of individual particles emitted in char burning stage was complicated. Result from the EDX showed that over 17 elements have been detected in individual non-carbonaceous particles, including O, Si, Fe, Mg, Al, Ca, Ti, S, K, P, Na, Cl, Sr, Ni, V, Mn and Zn, as shown in Fig. 7. O occurred on all analyzed particles. Si, Fe, Mg, Al, Ca, Ti occurred in more than half of all analyzed particles. The result was consistent with the content of major elements in coals from Xuanwei City (Hao et al., 2013; Shao et al., 2015). 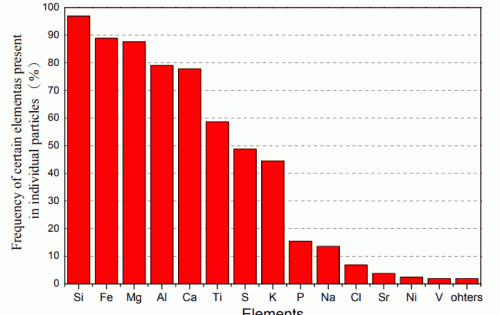 Minerals such as quartz (SiO2), chamosite ([Fe2+,Mg]5Al[AlSi3O10]), calcite (CaCO3), kaolinite (Al2SiO5([OH]4), and anatase (TiO2) in Xuanwei coal have been found by Shao et al. (2015). Because of the relative low burning temperature, most of the mineral particles were emitted at its original elemental compositions. For example, some quartz (SiO2), aluminates, calcite (CaCO3) and anatase (TiO2) (Figs. 3(c), 3(d), 3(i), and 3(l) from Xuanwei coal can be identified in burning-derived individual particles in this study. However, there were also some new particle formation through chemical reactions. For example, some Fe-rich particles partially resulted from the oxidized product of chamosite or pyrite (4FeS2 + 11O2 = 2Fe2O3 + 8SO2) (Lu et al., 2016). As shown in Fig. 6, the individual mineral particles were predominant in Si-rich (49%), followed by Ca-rich (25%), Fe-rich (14%), Ti-rich (7%) and other types (4%), which is consistent with the main mineral content of Xuanwei coal.

S-rich particles accounted for a small percentage throughout the whole burning process in this experiment.

Coal combustions can emit large amounts of polycyclic aromatic hydrocarbons (PAHs) which is harmful to human health (Downward et al., 2014). Previous studies have shown that the epidemic diseases might be related to indoor PAHs released from the coal burning in Xuanwei (Mumford et al., 1995; Liu et al., 2017). However, Tian (2005) found there was no obvious relationship between PAHs and lung cancer in a geographical correlation study in Xuanwei. We find a large number of organic particles in the ignition and fierce burning stages in this experiments. Since part of the organic particles belongs to PAHs, further research regarding PAHs is needed in the future.

The content of quartz in Xuanwei coal was almost ten times that found in the other coals (Large et al., 2009). Tian (2005) and Tian et al. (2008) have found that most of the burning-derived Si-rich particles were quartz. Si-rich particles accounted for a large number percentage of all analyzed mineral particles, at 49%, much higher than the average (28%) of burning-derived particles from the coals of Zhijin, Datong, Dongsheng, Yinchuan and Jingxi (Hou et al., 2018). In 1996, IARC have classified quartz as a Group 1 substance-carcinogen for humans (International Agency for Research on Cancer; http://monographs.iarc.fr/ENG/Classification/index.php). It should be mentioned that higher number percentage of Si-rich particles were also observed by Lu et al. (2016,2017); but the Si-rich particles were not found by using TEM at Fuyuan County, the neighboring area of Xuanwei (Lu et al., 2017).

Fe-rich particles accounted for 14.2%, which was nearly two times of the average (8%) coal burning-derived particles from the coals of Zhijin, Datong, Dongsheng, Yinchuan and Jingxi (Hou et al., 2018). Also, 78% of analyzed mineral particles contained Fe. The reactive oxygen species (ROS) can be formed through chemical reactions: (Fe2+ + H2O2 → Fe3+ + OH + OH−) (Valavanidis et al., 2000; Ambroz et al., 2001; Kim et al., 2001; Breheny, 2014). Once these Fe-containing individual particles were inhaled into the lung, they may do harm to the lung tissues.

According to the elemental composition, the mineral portion comprised Si-rich, Ca-rich, Ti-rich, Fe-rich, and other types of particles. In the char burning stage, the particles that were rich in Si, partially identified as quartz or aluminum silicate, were dominant (49%); followed by ones that were Ca-rich (25%), which were identified as CaCO3 or CaSO4; Fe-rich (14%), which mainly consisted of Fe and O and were recognized as Fe3O4 or Fe2O3; Ti-rich (7%), which were dominated by Ti and O and recognized as TiO2; and other types (4%).