Atmospheric particulate samples collected from Pingtan Island in Fujian province were analyzed for 20 organochlorine pesticides (OCPs) with the aims of elucidating the contamination levels and their influence factors, and providing more comprehensive and fundamental data for the risk assessment of OCPs in this coastal area. The concentration of total OCPs ranged from ND (not detected) to 27.25 pg m–3 (an average of 4.30 ± 4.07 pg m–3) and ND to 13.16 pg m–3 (an average of 3.11 ± 2.54 pg m–3) in 2006 and 2007 respectively, and the level are obviously lower than urban, industrial, suburban, and the similar research areas in the coastal areas of Europe. HCH (Hexachlorocyclohexane) and DDT (Dichlorodiphenyltrichloroethane) were the predominant contaminants, followed by Methoxychlor and Endrin, while the levels of Chlordane, Endosulfan, Aldrin and Dieldrin was relatively lower. Obvious seasonal variations in OCP levels correlate significantly with total particulate levels; higher concentrations of most OCP compounds appeared in winter, whereas lower concentrations appeared in summer. The distribution pattern of the level of most OCP compounds might be directly or indirectly influenced by meteorological conditions, and TOC (total organic carbon) is an important factor influencing the persistence of these OCPs in atmospheric particulates. The source of atmospheric particulates was traced by stable carbon isotopes, which indicate that the increased levels of OCPs in winter and spring influenced by the source of polluted air mass during the “heating season” of Northern China. The cancer risk probability was evaluated based on the residual levels of OCPs, and the results show that dermal contact was the primary pathway affecting human health, and the effect of OCP residuals in atmospheric particulates of the coastal area could not be neglected. 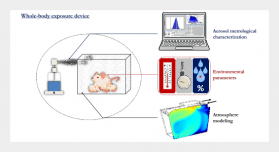