Tianjin, a city located in North China, is heavily polluted with frequent haze, particularly in winter. In this study, continuous online field observations of the sulfate, nitrate, ammonium, PM2.5, and gaseous pollutant concentrations in addition to the meteorological parameters were conducted in Tianjin during the 2014–2015 winter (December–January–February). The PM2.5 concentrations ranged from 5.6 to 495.6 µg m–3, with an average value of 112.2 ± 96.1 µg m–3. The worst pollution was observed in January, when levels on 10% of the days exceeded 250 µg m–3, qualifying as severely polluted, and four haze episodes, each lasting 5–7 days, occurred in rapid succession (separated by ~1-day intervals). Back-trajectory and chemical composition analysis suggested that elevated levels of secondary ionic aerosol species were a primary cause of these episodes. Regional transport of PM2.5 also played a large role in the formation of haze. CO was selected as an inactive chemical tracer in studying the chemical process of PM2.5 formation. The results indicated that when high concentrations of PM2.5 were present, the formation of secondary PM2.5 increased while the photochemical production of O3 ceased. The sulfur oxidation ratio [SOR = nSO42–/(nSO42– + nSO2); n refers to the molar concentration] and nitrate oxidation ratio [NOR = nNO3–/(nNO3– + nNO2)] increased with the PM2.5 level, and heterogeneous processes on the surfaces of fine particles rather than photochemistry drove the haze events. This research elucidates haze formation mechanisms, which must be understood in order to create effective control policies in Tianjin.

The purpose of this work was to investigate heavy aerosol pollution during the 2014–2015 winter in Tianjin. In this study, continuous measurements were performed, and the evolutions of PM2.5 and other related gas pollutants, such as SO2, O3, and CO, were explored under various meteorological conditions. Moreover, a back-trajectory model was developed to investigate the transport pathways and potential sources of PM2.5. The aerosol chemical data were then characterized for four high-pollution episodes in January 2015. The relative contributions of meteorological and chemical processes to aerosol concentration during the haze events were discussed, and the formation mechanisms were investigated in detail.

Online ambient observations were performed during the winter of 2014–2015 (December–January–February) on the Nankai University campus (39.13°N, 117.15°E) in Tianjin. The sampling site is situated approximately 14 m above the ground level, on the roof of the School of Environment at Nankai University (Fig. 1). There are no major pollution sources near the sampling site.

Fig. 1. (a) Google Earth map and (b) the location of the sampling site in Tianjin, China.

Continuous online observations were carried out for meteorological parameters, the mass concentration of PM2.5, and the mass concentration of the main chemical species in the PM2.5 with values averaged hourly. The mass concentration of PM2.5 was detected using a dichotomous monitor (PM-712; Kimoto Electric, Ltd., Japan) (Duan et al., 2016). The concentration of H2O, water soluble organic carbon (WSOC), water-soluble inorganic ions (NO3– and SO42–), and optical black carbon (BC) in the PM2.5 were monitored on a dichotomous aerosol chemical speciation analyzer (ACSA-08; Kimoto Electric, Ltd., Japan). The ammonium in the PM2.5 was calculated under the assumption that the ammonium existed as NH4NO3 and (NH4)2SO4 and the particles were neutral (He et al., 2012). The gaseous pollutants (O3, CO, and SO2) were detected by a MCSAM-13 system (Kimoto Electric, Ltd., Japan). Meteorological parameters, such as relative humidity (RH), temperature, pressure, wind direction (WD), and wind speed (WS), were monitored concurrently. Severe PM2.5 pollution characterized by long-lasting and frequent pollution episodes (Fig. 4) was present for most of January. We define an episode as the average daily PM2.5 exceeding 250 µg m–3 for a set of consecutive days. Four episodes were observed: January 1–6 (Episode I), January 7–12 (Episode II), January 13–17 (Episode III), and January 18–27 (Episode IV). The maximum episode-averaged PM2.5 concentration was 168.5 µg m–3 during Episode II (Table 1). Additionally, the high average PM2.5 concentrations were long-lasting (5–7 days) and occurred in rapid succession (i.e., intervals between the episodes of ~1 day). RH showed obvious diurnal cycles, with peaks at night, while temperature displayed the opposite trend, with the highest values appearing during the daytime (Fig. 2). The increased PM2.5 concentration was typically accompanied by increased concentrations of gaseous precursors, lower WS, and higher RH (Fig. 2 and Table S1). These relevancies have been reported in many previous studies (Xu et al., 2011; Li et al., 2017a). 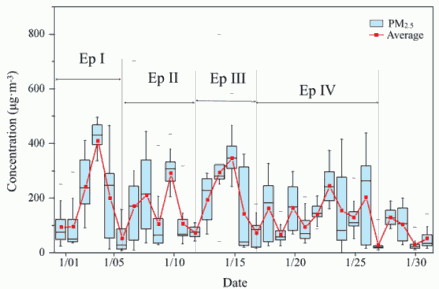 Fig. 4. Statistical results of the daily average PM2.5 concentrations for January 2015. For each box plot, the rectangle spans the 1st quartile to the 3rd quartile, and the central division indicates the median. The whiskers above and below the box show the locations of the 10th and 90th percentiles, respectively. The points above and below the whiskers show the 5th and 95th percentiles, respectively.

To investigate potential sources and transport pathways of PM2.5 in Tianjin, the NOAA HYSPLIT (ver. 4) model was used to calculate the 24-hour back-trajectories for the days with peak pollution values (January 4, 10, 15, and 23) and the relatively clean days between episodes (January 6, 12, 17, and 27) of the four pollution episodes in 2015 (Figs. 5(a)–5(d) and S2). For Episode I, II, and IV, particles originated from Hebei Province and Beijing and then moved through the western and southern regions of Tianjin to the study area. For Episode III, particles predominantly originated from the southwestern region of Tianjin, passing over the eastern region and circling around the study area. The high levels of PM2.5 observed on January 15 (averaging 361 µg m–3) could be due to whirling winds, a high RH of 52.7%, and a low WS of 1.5 m s–1. The RH in this event was about 20% higher than in others (Table 1) as the movement of the air mass near Bohai Bay may have facilitated the secondary conversion of aerosols. Finally, the trajectory shifted sharply to the north (for Episode I, III, and IV) or south (for Episode II) with high wind speed and the haze abruptly disappearing. Approximately 23–58% of the PM2.5 mass concentrations were measured by six components (Figs. 5(e)–5(l)). Three major secondary ionic species (sulfate, nitrate, and ammonium (SNA)) contributed 3–21%, 8–14%, and 4–11% of the total PM2.5, respectively, while H2O contributed 2–10%. BC and WSOC accounted for about 1–3% and 2–3% of PM2.5, respectively. Correlations between chemical components of PM2.5 were determined through regression analysis (Table S3). The unidentified portion of the PM2.5 mass might be organic matter (OM), crustal matter, and trace metal elements. As reported previously (Gu et al., 2011), OM was a predominant fraction of PM2.5, accounting for ~32.7%. However, it was not measured in this study and deserves greater attention in future studies. In addition to OM, SNA was an important cause of the reduction in visibility and regional haze pollution and was the dominant component of PM2.5 (Guo et al., 2014). Here we focus more on the measured SNA. The chemical composition varied with increasing severity of pollution, and the proportion of SNA was found to be increasing, especially in Episode III (Figs. 5(g) and 5(k)). Nitrate increased from 14% to 21%, from clean to heavily polluted; sulfate increased from 9% to 12%; and ammonium rose from 7% to 11%. The back-trajectories and chemical composition results indicated that the secondary ionic species of aerosols were one of the important causes of the haze episode. The regional transport of PM2.5 also played a big role in haze formation. To assess the contributions of chemical processes to aerosol concentrations during haze events, CO was selected as a chemically inactive tracer. The chemical lifetime of CO, which is on the order of a few months, depends on OH concentrations (Brasseur, 1999; Zhang et al., 2015). The ratios of PM2.5/CO, O3/CO, NO2/CO, and SO2/CO were analyzed at different PM2.5 levels (Fig. 6). The results showed that the PM2.5/CO ratio (Fig. 6(a)) increased with increasing PM2.5 levels, suggesting that secondary PM2.5 aerosol levels increased during the haze episodes. The O3/CO ratio (Fig. 6(b)) rapidly decreased when the PM2.5 concentrations increased from 75 to 250 µg m–3 and remained at very low levels when the PM2.5 concentration rose above 250 µg m–3, indicating that the photochemical production of O3 ceased during the high PM2.5 periods, similar to results reported in other studies (Bian et al., 2007). SOR and NOR are often used as indicators of secondary transformation of SO2 and NO2 to form SO42– and NO3–, respectively (Zheng et al., 2015; Xu et al., 2017). Higher SOR and NOR (Figs. 6(e)–6(f)) values were observed during the polluted periods than during clean periods, while the SO2/CO and NO2/CO rapidly decreased with increasing PM2.5 levels (Figs. 6(c)–6(d)). The results further indicated that the secondary aerosol levels were elevated on haze days, and it was hypothesized that the transformation of enhanced secondary aerosols was most likely driven by heterogeneous processes because the photochemical production of ozone ceased concurrently. RH is generally regarded as one of the main factors facilitating the formation of haze through heterogeneous reactions (Chen et al., 2016). The heterogeneous reactions in the following discussion cover both aqueous-phase reactions and gas-particle partitioning. As shown in Fig. S3, as the RH increased from 12% to 86%, the SOR value exhibited an increasing trend, with high correlation (R2 = 0.64). The size and surface area of the particles was enlarged with the increased RH. Thus, the pre-existing SO42– were able to absorb water, which facilitated their capacity to accommodate aqueous-phase reactions (Cheng et al., 2015, Li et al., 2017a). Meanwhile, the particle viscosity decreased due to high RH. The mass transfer limits for gaseous pollutants into particle phase were kinetically elevated. Consequently, more pollutants were transferred into the particle phase, which aided the heterogeneous reactions (George et al., 2015). Therefore, enhanced secondary transformation during the haze events was mainly driven by heterogeneous processes, not the photochemistry.

During the winter of 2014–2015 in Tianjin, China, the most severe PM2.5 pollution, comprising four haze episodes, was observed in January. The secondary formation of aerosols was a primary cause of these episodes, and regional transport of PM2.5 also played a main role. When PM2.5 levels were high, the formation of secondary PM2.5 increased, and the photochemical production of O3 ceased. This study’s analysis of PM2.5’s chemical signatures contributes to our understanding of the current air pollution in Tianjin and can be used to improve model validation and emission control.