The size, morphology and chemical characterization of individual atmospheric particles have received significant attention due to their effects on radiative and chemical properties. Tehran is one of the most polluted cities not only in Iran but in the world, which is continuously affected by air pollution. In this study, 25 sites were sampled in urban and non-urban areas. The sampling was performed with a high-volume sampler for a period of 14–24 hours. Scanning Electron Microscopy (SEM) and Energy Dispersive X-ray Spectroscopy (EDS) were used to characterize the aerosols in the urban and non-urban areas during each season. The SEM results indicate that during summer, flaky, irregularly shaped aggregate particles dominated the urban areas, whereas non-urban areas were relatively clean. During winter, the non-urban sites were observed to be dominated by spherical and irregularly shaped particles, suggesting combustion sources, whereas particles were observed in a more concentrated form at the urban sites. EDS analysis shows varying percentages of C, O, Zn, Si, Ca and Fe at both the urban and non-urban sites for all seasons. Furthermore, this study reveals the variability of the morphological and elemental composition of PM in different seasons at urban and non-urban locations and highlights the various probable sources associated with them. 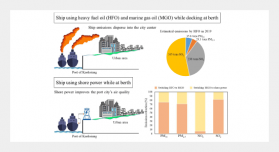