The surface ozone (O3) in non-urban areas can be strongly influenced by transported regional air pollutants from distant urban agglomerations. Comprehensively using the polar plot graphical technique, and backward trajectory and potential source contribution analyses, the variations of surface O3 and its potential source regions at an island site of Zhejiang, China, were analyzed based on data from June 2013 to October 2016. Relatively high hourly O3 levels (max.: 154.0 ppb) were often observed, with the total number of hourly O3 exceeding the national standard (75 ppb) being 583, indicating high health risks from O3 exposure. An obvious time-lag for the diurnal O3 peak was observed, with the daily maxima often occurring at 16:00. A decreased O3 level was observed in summer, which was probably due to the comprehensive influence of intense rainfall, high relative humidity and clean marine airmasses during this season. The transport of external air pollutants played a dominant role in affecting local O3, with relatively high O3 concentrations (> 50 ppb) being observed under high wind speeds (> 5 m s–1). Based on all the source identification analyses, the major regions contributing to the surface O3 lay to the north and northwest of the study area. Long-range transported air pollutants from the coastal provinces of the North China Plain may have significantly enhanced surface O3 at the study site, while contributions from local areas and areas to the south of the study site were rather small. A high incidence (64.3%) of O3 pollution was accounted for by the inflowing airmasses from outside of Zhejiang, which quantitatively confirmed the significant background transport of O3 to this province. Coordinated inter-regional control on pollutant emissions should be carried out to reduce O3 in Zhejiang Province. 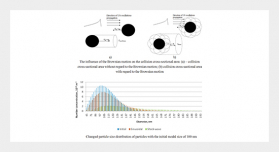 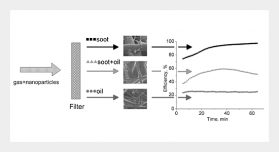 Filtration of Submicron Soot Particles, Oil Droplets, and their Mixtures on Single- and Multi-layer Fibrous Filters