Simultaneous measurements of black carbon (BC) and non-refractory PM1 aerosol chemical compositions were performed in autumn 2016 at a suburban site in Hong Kong. A thermodenuder (TD) was employed at different heating temperatures to remove semi-volatile aerosol fractions to varying degrees. The light absorption enhancement (Eabs) of BC due to semi-volatile coatings at seven wavelengths was evaluated, and the coating fractions were further analyzed. Results showed that the overall Eabs ranged from 1.58 ± 0.13 (470 nm) to 1.64 ± 0.16 (660 nm) at 280°C and increased very little from 50°C (1.02–1.04) to 200°C (1.13–1.20). The lensing-effect-related Eabs was probably attributable to the presence of ammonium and sulfate. Furthermore, the ratio of the coating thickness to the BC core radius was around 1.0–2.0 based on Mie calculations. This work evaluated the Eabs from coatings in Hong Kong and implied the BC mixing state, thus providing a critical reference for climate models on the role of aerosol in global warming. 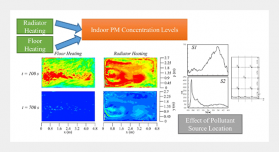