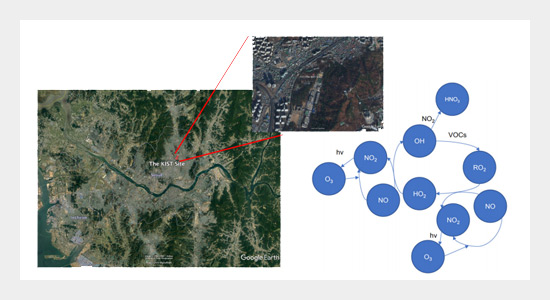 We present the ambient ozone and relevant observed trace gas dataset in Seoul, South Korea, during the Megacity Air Pollution Studies (MAPS)-Seoul field campaign from May to June of 2015 (MAPS-Seoul 2015). We observed two distinctive periods, one with higher and the other with lower daytime ozone levels despite mostly clear conditions for both periods. The importance of peroxy radical contributions to excess ozone production is illustrated by the substantial differences in the Leighton constant (Φ) for the two periods. Moreover, higher levels of hydroxyl radical (OH) reactivity (s–1) were observed during the high ozone episode compared to the low ozone episode by as much as ~5 s–1. The contributions of nitrogen oxides (NOx) to OH reactivity become less important than those of volatile organic compounds (VOCs) during the high ozone episode, which suggests the NOx saturated ozone production regime. It was also notable that the biogenic VOC isoprene consistently contributed the most to OH reactivity from among the observed VOCs during the afternoon throughout the whole field campaign. Finally, we ran multiple box model scenarios to evaluate the ozone production rates of three different air mixtures: a high ozone mixture, a low ozone mixture, and a simulation of the regional air quality. The results indicate that the total OH reactivity levels and the relative contributions of VOCs to NOx play critical roles in ozone production rates. The simulated air quality mixture results in lower OH reactivity, causing lower ozone production rates than those calculated for the high ozone mixture, which clearly indicates the need for further improvements in the regional model to accurately simulate ozone precursors in the region. The results of this study suggest that a comprehensive trace gas dataset combined with observations of the OH reactivity enables us to properly diagnose the photochemistry behind ozone pollution, leading to effective ozone abatement policies.