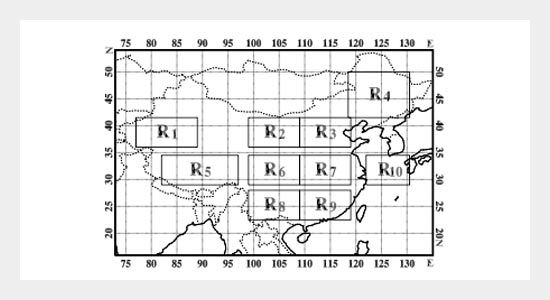 Two years of CALIPSO level 2 version 2 data were analyzed to obtain regional distributions of vertical profiles of the aerosol extinction coefficient (AEC) across China. 10 typical geographical regions were selected for comparison, which cover various aerosol pollution levels, climate zones, and underlying surfaces. The whole troposphere was split into two-layers: the Lower- and the Upper-layer—separated by the maximum boundary layer height—which represent the boundary layer and the upper tropospheric layer, respectively. The annual average of the column-average AEC in the 10 regions ranged from 0.066 to 0.243 km–1 in the Lower-layer and from 0.022 to 0.059 km–1 in the Upper-layer. The regional AEC in the Lower-layer was the highest in central and eastern China, followed by that in the Sichuan Basin, the Yunnan-Guizhou Plateau, the capital economic circle, the Pearl River Delta, the desert region, the Tibetan Plateau, northeast China, the northwest semi-arid plateau, and, finally, the East China Sea. The seasonal AEC in the Lower-layer was the highest during spring in the desert and marine regions, during the summer on the Tibetan Plateau, and during autumn or winter in the other regions. The regional and seasonal patterns of AEC in the Lower-layer agreed to a large extent with known regional distributions of surface-layer PM2.5 distributions and dominant seasonal emission sources in their respective regions. Regional and seasonal patterns in the Upper-layer were slightly different from those in the Lower-layer due to different transport pathways of aerosol pollution in different regions. The proportion of occurrence under different pollution conditions and the number of polluted days were also estimated separately for the Lower- and the Upper-layer, based on AEC vertical profiles for each region. 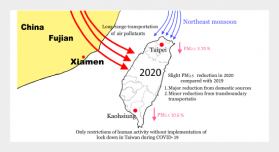 Big Data Analysis for Effects of the COVID-19 Outbreak on Ambient PM2.5 in Areas that Were Not Locked Down