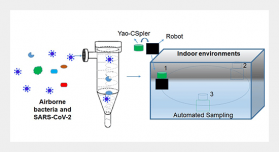 Field Tests of Indoor Air Cleaners for Removal of PM2.5 and PM10 in Elementary School Classrooms in Seoul, Korea