A dynamical evaluation of the Flexible Air quality Regional Model (FARM) system was conducted to assess its ability to predict changes in heavy metals (HMs) and polycyclic aromatic hydrocarbons (PAHs) concentrations over Italy between the years of 2005 and 2010. Several simulations were performed to relate variations in the PAHs and HMs concentrations to changes in the emission inventories, meteorology or grid resolution. The results generally indicate that these concentrations have decreased through the years and the magnitude of decrease is dependent on the specific chemical species. The changes in emissions have determined the major variations of all chemicals, whereas the meteorology has caused significant changes in the concentrations of reactive species, such as benzo[a]pyrene (BaP), in high-resolution simulations, especially over complex topography. The analyses also show that while the total emitted mass of pollutants is important, its geographical distribution is fundamental to estimating changes in concentration. 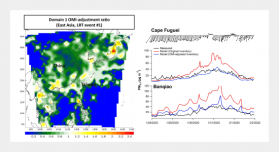