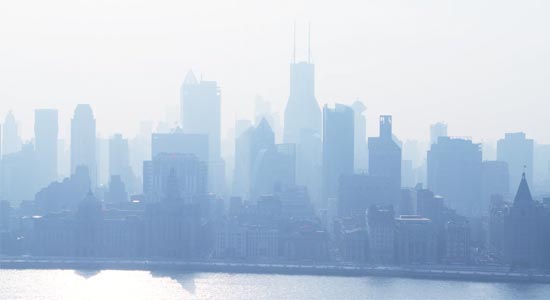 With the acceleration of urbanization in China, haze has become a growing threat to human health. However, comprehensive research on the diffusion and evolution of PM2.5 is still lacking. Therefore, this study proposed an improved Gaussian smoke plume model that considered the influence of multiple factors, such as rain wash, gravity sedimentation, and surface rebound, on PM2.5. Additionally, the evolution of PM2.5 was predicted by selecting 9 factors with a large influence. In the prediction, a support vector machine (SVM) and radial basis function kernel were adopted to construct classifiers and obtain the maximum distinction degree, respectively. Finally, the diffusion simulation and experimental evolution prediction were verified using data obtained from nine PM2.5 monitoring stations in Wuhan. The experimental results showed that the algorithm could obtain considerably accurate simulation results of the PM2.5 diffusion with low error for measured values. Therefore, this model may be useful in government plans for formulating strategies that control and reduce environmental pollution.