To investigate the characteristics of elements in size-segregated atmospheric particulates, samples were collected using a 14-stage electrical low-pressure impactor (ELPI+) at an urban site in Zhengzhou from October 1 till 25, 2016, and analyzed for 25 elements. Results show that crustal elements were concentrated in coarse particles and toxic elements were concentrated in ultra-fine particles. The size distributions of Na, Mg, Al, Si, Ca, Fe, Ti, S and Cl were uni-modal with dominant peaks in the size range of 1.43–2.14 µm or 0.295–0.487 µm. K, P, Mn and Ba exhibited bimodal distributions, and the remaining elements showed multimodal distributions. Enrichment factor, correlation and principal component analyses indicated that vehicles were the dominant source of particles. Biomass burning, coal combustion and dust also contributed to the accumulation of particles. The elemental concentrations affected by different air masses are discussed to investigate the effects of regional transport. An increase in elemental concentrations related to vehicle and coal sources was observed when air masses came from eastern areas. Furthermore, air masses from the southeast could be a major factor in air pollution for Zhengzhou during special times, such as periods of biomass burning or naked cropland. When air masses came from the northwest, the majority of elements from dust and coal combustion were lower in concentration compared with clean days, while elements originating from vehicle emissions increased. 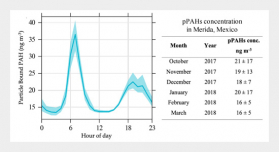