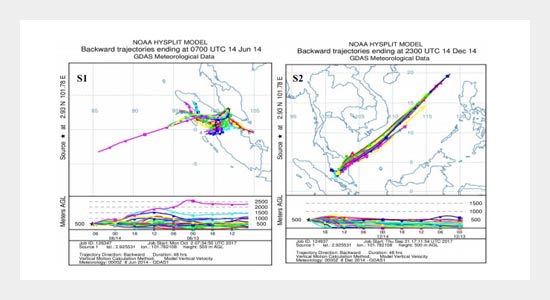 The composition of atmospheric particulate matter (PM10) can help to identify its potential sources and possible impact on human health. This study investigates the seasonal variations and sources of heavy metals in PM10 in the Cheras area. PM10 samples were collected on a 24-h basis using a high-volume air sampler in June during the southwest monsoon and in December during the northeast monsoon of 2014. Selected hazardous trace metals, viz., As, Pb, Cu, Ni, Cd, Co, Mn, Zn, Fe, Cr, V and Ba, were measured by inductively coupled plasma mass spectrometry (ICP-MS). The result showed that the mean concentrations of PM10 were 207.63 ± 7.82 and 138.32 ± 4.67 during the southwest and northeast monsoons, respectively. The heavy metal concentrations during the southwest monsoon followed the order Ba > Fe > Cu > V > Zn > Pb > Mn > Cr > As > Ni > Cd > Co, while those during the northeast monsoon followed the order Zn > Fe > Ba > Cu > Pb > V > Cr > As > Mn > Ni > Cd > Co. The results of the enrichment factors (EFs) showed that the major trace metals mainly originated from anthropogenic sources. A correlation analysis indicated that pairs of trace metals from similar sources were suspended in PM10 in the ambient air. The source apportionment by principal component analysis (PCA) and cluster analysis (CA) suggested that vehicle exhaust and brake and tire wear, industrial emissions and the re-suspension of dust, as well as oil combustion, were the most dominant sources of PM10 in this study. Did COVID-19 Lockdown Restrictions have an Impact on Biomass Burning Emissions in Sub-Saharan Africa?