The characteristic of nitrogen dioxide (NO2) concentrations, including the long-term trends, spatial distribution, and effects of emission reduction measures-particularly those related to traffic management-were analyzed in Beijing by multimethods. The annual mean concentration of NO2 in Beijing decreased significantly from 71.0 µg m–3 in 2000 to 49.0 µg m–3 in 2008 while it fluctuated between 49.0 and 58.0 µg m–3 and decreased slightly from 2008 to 2015. Unfavorable diffusion conditions could increase NO2 concentrations while emission reduction measures especially the reduced vehicle NOx emissions could decrease NO2 concentrations significantly. The observed mean concentration of NO2 was 54.47 ± 7.71 µg m–3 from 2013 to 2015, while it changed to 94.62 ± 7.99 µg m–3 for 149 heavily polluted days. The NO2 concentration was lower in the northern and western regions and higher in the urban and southern areas in Beijing. After the implementation of air quality assurance measures (particularly traffic management) during the Asia-Pacific Economic Cooperation Summit (APEC, 1–12 November, 2014) and the Parade on the 70th Victory Memorial Day for the Chinese People’s War of Resistance against Japanese Aggression (PARADE, 20 August–3 September, 2015), the mean NO2 concentrations during the APEC summit and PARADE decreased 46.2% and 39.5% respectively compared with those before and after these major activities while diurnal NO2 peaks decreased 24.5%–85.3% and 4.1%–70.8%, respectively during the APEC summit and PARADE period. To decrease NO2 concentrations, a high level of commitment must be given to promote coordinated regional air pollution prevention and control mechanisms in Beijing and its surrounding areas. 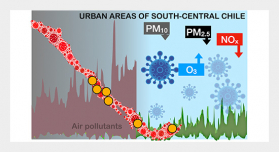