Flotation has been proven to successfully remove most polychlorinated dibenzo-p-dioxins and polychlorinated dibenzofurans (PCDD/Fs) and carbon constituents from hospital solid waste incinerator (HSWI) fly ash. The resultant froths contain large quantities of carbon constituents that can reburn in the incinerator. In this paper, the reburning behavior of froths at temperatures from 800°C to 1200°C was compared with that of HSWI fly ash. Results showed that the destruction efficiency of PCDD/Fs was higher in the froths than in the fly ash at the same reburning temperature. The destruction efficiencies of PCDD/Fs in the froths exceeded 98% at temperatures higher than 1000°C. The volatilization ratio of Pb, Zn, and Cu was lower in the froths than in the fly ash. Furthermore, reburning of the froths can achieve energy recovery of the carbon constituents. Therefore, flotation followed by reburning treatment in a combustion chamber could be a suitable process for the detoxification and reutilization of HSWI fly ash. 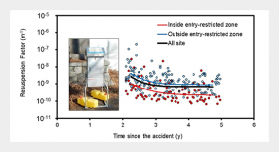 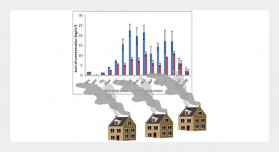