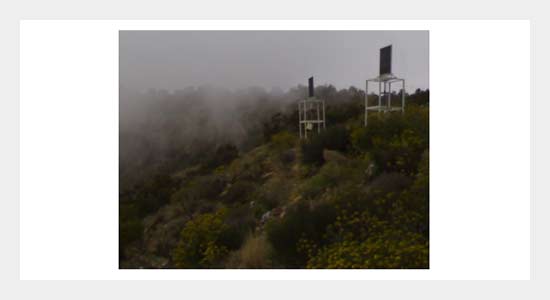 Scarcity of fresh water is one of the greatest obstacles to achieve the sustainable development in the Kingdom of Saudi Arabia. About thirty desalination plants are built to satisfy the Kingdom needs. The Kingdom is in need of new unconventional water resources such as fog water harvesting system which will complement the existing water resources in the Asir region. This region is facing major challenges due to the flourishing tourism, irrigation in agriculture and rising living standards. Passive mesh type fog collector is analyzed in the current study to predict the rate of fog water collection by combining a physically based impaction and aerodynamic models. The results indicate that the greater volumes of water can be harvested from the fog associated with higher wind speeds, bigger sizes of fog droplet and higher liquid water content in the fog-laden winds with the threshold mesh shade coefficient of about 0.56. It is found that the aerodynamic efficiency has a significant impact on the overall fog collection efficiency compared to the impaction efficiency. The model shows that for the fog droplet size of 30 µm with the wind speed of 4 m s–1, it is possible to collect the fog water at the rate of 0.65 to 9.7 L m–2 per hour when the liquid water content (LWC) in the fog varies from 0.2 to 3 g m–3, respectively.