The sites of Luoyang, Zhengzhou, and Pingdingshan in Henan, China were selected to investigate the chemical compositions of fine particulate matter (PM2.5). A total of 165 PM2.5 samples from the three sites were collected from October 2014 to July 2015. Water-soluble inorganic ions, elemental carbon and organic carbon, and other elements in PM2.5 were analyzed by ion chromatography, carbon analyzer, and inductively coupled plasma mass spectrometry, respectively. Results showed that the annual average concentrations of PM2.5 in the three sites were significantly higher than the Chinese national ambient air quality standard. The seasonal average of PM2.5 concentration varied with the lowest concentrations of PM2.5 in summer. Among these sites, the highest concentrations of SO42– and NH4+ ions were observed in Luoyang with the highest concentration of NO3– detected in Zhengzhou. SO42–, NO3– and NH4+ ions occurred as (NH4)2SO4 and NH4NO3. For seasonal variation, the highest concentrations for Al, Fe and Ca were observed during spring in Pingdingshan and autumn in Zhengzhou and Luoyang, respectively. Enrichment factor (EF), as an indicator, is commonly used to evaluate the contribution of anthropogenic sources, and high EFs of Zn, Cu, and Cd in PM2.5 indicate the extent of air pollution, which is generally caused by emissions of vehicles and industries. Risks posed by heavy metals on human health were assessed. The hazard index, which was used to assess the overall potential for noncarcinogenic effects, was higher than 1 in the three sites, indicating that V, Cr, As, Mn, Cd, Co, and Ni may cause accumulative noncarcinogenic health effects on humans, without the noncancer effect of each heavy metal significant. Cr in PM2.5 is a potential carcinogenic risk when inhaled by adults. Overall, the results indicate that PM2.5 pollution must be considered seriously in three cities. 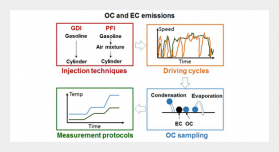