Arid riverbed is an important source of Aeolian dust to influence the atmosphere of nearby village or downtown. In general, Aeolian dust pertains to wind activity in the study of geology, environment and meteorology on particle suspension. This field study set the horizontal/vertical sampling system up in order to investigate the Aeolian dust dimensional distribution properties from the riverbed of the Jhuoshuei River. In addition, the study utilized the unmanned aerial vehicle (UAV) imagery to discriminate the covering condition of riverbed. The results revealed that the percentage of riverbed covering conditions, including bare zone, wetlands, green covering and water covering was about 50.1, 15.7, 16.8 and 17.4%, respectively, on January 5th, 2011. Two Aeolian dust cases from riverbed were measured on November 26th, 2010 and January 15th, 2011. First sampling case was under slower wind speed, and the total particulate matter (PM) concentration in vertical sampling was almost decreased with increasing sampling height, however, the phenomena of second case (faster wind speed) was just on the contrary. Besides, Aeolian dust was distributed in a bimodal or a multimodal curve, and the main peak size was above 10 μm. Mode size of suspension particle diameter was increased as the wind speed increased (14.8 μm/ first case; 21.3 μm/ second case). The total mass concentration ratio of south site to source site (one meter height) was about 1:9 in first case and about 1:3 in second case. Comparing with those two cases, the faster the wind is, the shorter the surface roughness height is (3.08 mm/ first case; 1.07 mm/ second case). Besides, as the wind speed increasing, the friction velocity was also increased (0.33 m s–1/ first case; 0.68 m s–1/ second case). Consequently, this study clued the spatial variability of river dust events, which can further aid the site investigating, forecasting and preventing of dust influences. 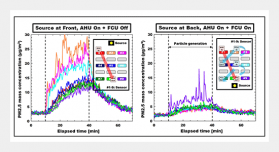