Kingdom of Saudi Arabia and the Gulf region are frequently exposed to major dust storms and anthropogenic emissions from rapidly growing industrial activities that affect aerosols optical and physical characteristics. This paper integrates observations from space-borne sensors namely MODIS and CALIPSO, together with AERONET ground observations to examine eight years aerosols characteristics during the (March–May) season of 2003 to 2010 over Saudi Arabia. Aerosol analysis from the interdependent data assessment show comparable aerosols characteristics over the eight year period with higher aerosols mean optical depths over enhanced dust load region, (46–50°E, 25–29°N), during March–May of 2009 and 2010. The mean angstrom exponent during March–May 2003 to 2008 was found ~17% higher than the same period during 2009. The major dust storm on March 9 and 10, 2009 could have an effect on the coarse mode particles increment during 2009. Over the eight years the highest angstrom exponent was observed on 2004 suggesting dominance of fine-mode particles, whereas a declination in the angstrom exponent values is observed during 2005, 2006, 2007, and 2008. The aerosols size distribution measured by sunphotometer indicates a maximum value of ~47% higher in 2009 compared to 2010 suggesting the domination of coarse mode particles in 2009. Using the CALIPSO volume depolarization ratio, a possible mixing of anthropogenic aerosols with dust was observed during March–May of 2009 and 2010 featured by coarse particles domination and high percentage of fine particles during 2009. The effect of precipitation prior to dust storms on dust loading was investigated. Our observation suggests a possible impact of the varying precipitation rate prior to dust storms outbreak and the actual dust loading during dust events. 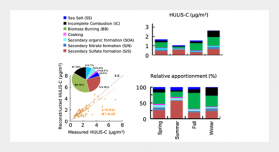