Two portable, battery powered particle size distribution analyzers, TSI NanoScan scanning mobility particle sizer (TSI NanoScan SMPS 3910, USA) and Kanomax Portable Aerosol Mobility Spectrometer (Kanomax PAMS 3300, Japan), have been recently introduced to the market. Both are compact and allow researchers to rapidly measure and monitor ambient or indoor ultrafine and nanoparticles in real time. In addition, both instruments apply the SMPS measuring scheme, utilizing a corona charger in place of a radioactive neutralizer, and are integrated with a hand-held condensation particle counter (CPC). In this study, the different designs, flow schemes, and operational settings of both instruments have been summarized based on the information released by the manufacturers and the available published literature. The performance characteristics and monitoring capability of these two portable ultrafine to nanoparticle sizers were investigated and compared to a reference TSI 3936 lab-based SMPS under identical conditions. Reasonable agreement was found between the three instruments in terms of their efficiency in sizing and counting polydispersed particles. Of the two portable analyzers, PAMS was able to provide a higher sizing resolution for monodispersed particle measurements than NanoScan, when operated under the High Mode (higher sheath to aerosol flow ratio). 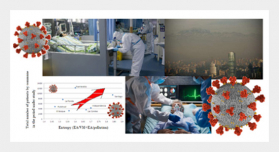 Vertical Distribution of PM2.5 Transport Flux in Summer and Autumn in Beijing