We report on 10 years of hourly atmospheric radon, CO, and SO2 observations at Gosan Station, Korea. An improved radon detector was installed during this period and performance of the detectors is compared. A technique is developed whereby the distribution of radon concentrations from a fetch region can be used to select air masses that have consistently been in direct contact with land-based emissions, and have been least diluted en route to the measurement site. Hourly radon concentrations are used to demonstrate and characterise contamination of remote-fetch pollution observations by local emissions at this key WMO GAW site, and a seasonally-varying 5-hour diurnal sampling window is proposed for days on which diurnal cycles are evident to minimise these effects. The seasonal variability in mixing depth and “background” pollutant concentrations are characterised. Based on a subset of observations most representative of the important regional fetch areas for this site, and least affected by local emissions, seasonal estimates of CO and SO2 in air masses originating from South China, North China, Korea and Japan are compared across the decade of observations. 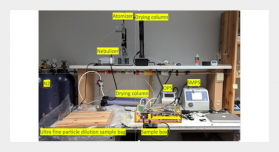