In developing cities, buildings with different heights obstruct the diffusion of pollutants. In this study, dust particles transported within urban street canyons were simulated using Reynolds-averaged Navier–Stokes (RANS) method, and air-solid two-phase flow fields were obtained on a regional scale. Four typical street building models were used in this study: (a) low-rise buildings (H/b = 1), (b) step-up building arrangements (H/b = 1, 2, 3, 4, 5), (c) step-down building arrangement (H/b = 5, 4, 3, 2, 1), and (d) high-rise buildings (H/b = 5). The particle volume fraction distribution in the four models reflected the basic properties of particle transportation in the canyons. Vortices were observed on the roofs of street canyons, which prevented particles from being transmitted into the canyons, and the vortex regions were characterized as low particle concentration.

To evaluate the dust particle transport performance in the models, three indices, namely particle transport efficiency, suspension fraction and suspension density, were defined. These concepts were based on the particle number concentrations, which were obtained using the Lagrange approach. The high-rise building model (H/b = 5) demonstrated the lowest transport efficiency among all four models, and it also had the lowest suspension density in the street canyons. This implied that the high-rise buildings hindered the particles from being transporting further and that the particles could not enter the deep canyons easily. In the step-down building arrangement model (H/b = 5, 4, 3, 2, 1), the particle concentration level and suspension density in the canyons were lower than those observed in the step-up building arrangement model (H/b = 1, 2, 3, 4, 5), indicating that a step-down building height arrangement is appropriate for creating construction plans for developing cities. 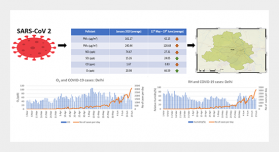