Asian continental outflow air masses reach western Japan in the springtime, carrying high levels of ozone produced over the Asian continent, and facilitating in-situ production. In this study, in-situ production was highlighted; the rate and limiting factors of net ozone production were diagnosed at Fukue Island, a remote island west of Japan, on 17 days during May–June 2009, when the continental outflow air mass arrived, using an observation-based modeling approach. The average ozone production was estimated to be 6.8 ppb per day. Information on the chemical status of the arriving air mass is important, because it affects how further ozone production in the air mass occurs after precursor addition from Japanese domestic emissions. The main limiting factor of ozone production for such air masses was usually nitrogen oxides (NOx), suggesting that domestic NOx emission control is important in reducing further ozone production. Volatile organic compounds (VOCs) also increased the ozone production rate, and occasionally (14% of time) became the dominant controlling factor. This analysis implies that the VOC reduction legislation recently enacted by the Japanese government should be effective. VOC-limited conditions occurred particularly when the air mass traveled within 6‒8 h, via the Korean Peninsula. The uncertainty in the radical chemistry mechanism governing ozone production had a non-negligible impact, but the main conclusion relevant to policy was not altered. When chain termination was augmented by HO2 + NO/NO2 reactions in the presence of H2O and by heterogeneous loss of HO2 on aerosol particle surfaces, as recently verified or hypothesized, the daily ozone production rate decreased by up to 24%, and the fraction of hours when the VOC-limited condition occurred varied from 14% to 13‒26%. 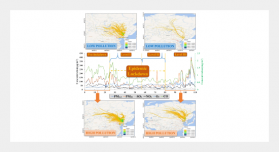