New particle formation (NPF) significantly influences the number concentrations and size distributions of an atmospheric aerosol and is often followed by the rapid growth of the newly formed particles. Recently a reversal process leading to particle shrinkage was reported and was found to occur under specific atmospheric conditions, which are unfavourable for the growth of nucleated particles. In this study we present an analysis of particle shrinkage events following prior NPF at an urban background station in Prague, Czech Republic. The study is based on two-year measurements of particle number size distributions using Scanning Mobility Particle Size (SMPS). A total of 22 shrinkage events were identified and the vast majority of the events was observed in the spring and summer seasons. The determined shrinkage rates span the range from –2.5 to –12.5 nm/h. During the most intensive events, the grown particles shrank back to the smallest measurable size of 10 nm. The particle shrinkage was attributed to the evaporation of previously condensed volatile and semi-volatile species from the particulate phase to the gas phase. When analysing the dependence on meteorological conditions, the particle shrinkage was found to occur under peak global radiance intensity, which was gradually decreasing, or under a sharp drop of global radiance intensity. The shrinkage events were also related to high ambient temperature and low relative humidity. The occurrence of atmospheric mixing was found to promote particle shrinkage very effectively, because the decrease of vapour concentration due to changing atmospheric conditions is more rapid than the decrease of vapour concentration caused by lower photochemical activity due to a drop in solar radiation intensity. 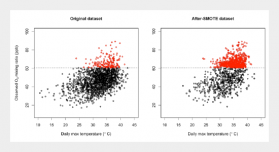 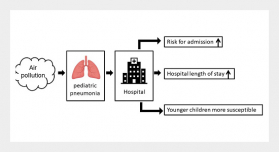 Association between Air Pollution and Risk of Hospital Admission for Pediatric Pneumonia in a Tropical City, Kaohsiung, Taiwan 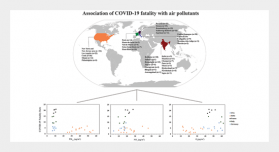