To investigate the characteristics of organic carbon (OC) and elemental carbon (EC) in the ambient air of coking plant, particulate matter samples were collected and analyzed. The OC and EC mass concentrations were in the range of 104.2–223.2 µg/m3 and 93.7–237.8 µg/m3, respectively, which were much higher than those in the ambient air of industry, highway, and urban roadway tunnel. The OC concentrations did not significantly differ at the coke side and the machine side, whereas the EC concentration was significantly higher at the coke side. The OC/EC ratios ranged from 0.74 to 2.35, and coking was the primary source of OC and EC. Carbonaceous aerosol was a large component in the ambient air, and the total carbonaceous aerosol (TCA) accounted for 39.1%–73.0% of the total suspended particulates (TSP). TCA contributions to TSP were consistent at the coke side and the machine side, and both contributions were lower than those at other sampling sites. OC and EC emission control must be strengthened for improving coking plant air quality and reducing health hazards to coke-plant workers. OC–EC correlation was evident, with a correlation coefficient of 0.976 (p < 0.05) at the coke-oven top, coke side, and machine side, whereas no significant correlations were observed at sites downwind of the coke oven (p > 0.05). 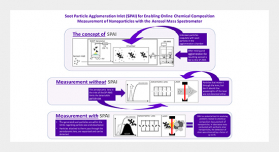