Developing countries, such as China, are facing serious air pollution issues due to fast economic development. In this study, traffic related air pollutants, including number concentration of ultrafine particles (UFPs, diameter < 100 nm), mass concentrations of PM2.5 and black carbon (BC) were measured near the Peking University (PKU) campus in Beijing in December 2011. Data were collected concurrently at a roadway site and on PKU campus. Meteorological data were collected at approximately 40 meters northeast from the roadway sampling site. The traffic density was determined from recorded video footage. Roadside UFP and PM2.5 concentrations were not significantly higher than on campus. A statistically significant Pearson’s correlation of 0.75 was found between BC and PM2.5 mass concentrations. No apparent correlation was found between wind speed and UFP number concentrations, but strong log-decay correlations were found between wind speed and PM2.5 (R2 = 0.80). There were three days during the measurements when both PM2.5 mass concentrations and UFP number concentrations were higher at the campus site than at the roadway site. This suggests there were potential local emission sources on campus. Temporal profile of UFPs at the campus site peaked around lunch and dinner time, suggesting emissions from the surrounding restaurants and cafeteria that used Chinese-style cooking might have contributed to the observed PM2.5 and UFP levels on campus. 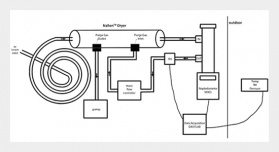