In order to identify the source apportionment of particulate matter PM10 and PM2.5 in the southern Mediterranean coast of Tunis (Tunisia), three different sites characterized respectively by traffic, industries and being an urban background area are studied. The chemical characterization included a gravimetric determination of atmospheric particles mass concentration, measurements of the major anions (SO42–, NO3–, Cl–) and cations (Ca2+, Mg2+, K+, NH4+) concentrations in the aerosol samples by ion chromatography and analysis of 18 elements by energy dispersion X-ray fluorescence. Aerosol ion balance of various PM10 constituents are used to identify possible sources of the particulate matters. Thanks to these analysis, the particulate masses were reconstructed from the main possible constituents: crustal matter, primary and secondary pollutants, marine aerosols and organic matter. Wherever PM10 and PM2.5 were studied, PM10 crustal elements and sea salt aerosols were mainly associated with the coarse fraction whereas primary and secondary anthropogenic pollutants as well as organic matter rather compose PM2.5 fraction. In all the sites, PM10 mass was mainly composed of crustal matter (41–50%) and poorly of sea salt (3–4%). And so aerosols chemical composition is heavily affected by dust winds from Sahara desert, with some contribution of local traffic and industries and only a slight direct impact of the nearby Mediterranean sea. 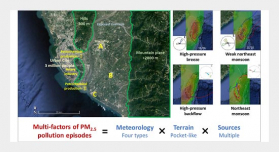 Atmospheric PM2.5 near an Urban-Industrial Complex during Air-pollution Episodes with Various Meteorological Conditions 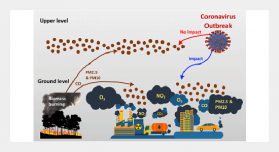