Although it is known that air pollution may lead to increased asthma prevalence, no clear scientific evidence of direct association between air pollution and asthma rate has been reported. In the present study, a Geographical Information System (GIS) approach was developed to determine the association between asthma hospital discharge rate (ADR) and seasonal exposure to specific ambient air pollutants in eastern Texas, USA, during the period 2009 to 2011. Quarterly asthma data were obtained from Texas State Department of Health, National Asthma Survey surveillance of Texas State, USA. Quarterly mean concentrations of fine particular matter (PM2.5), nitrogen dioxide (NO2), and ozone (O3) were determined from the corresponding measured daily data collected by various air quality monitoring stations distributed in different counties in the study area. Using Pearson correlation analysis, quarterly average of air pollutant concentrations was compared to quarterly Asthma discharge rate (ADR). The results revealed that the association between quarterly exposure of air pollution and ADR was not statistically significant in the study area. During the study period, a negative correlation coefficient was observed between the quarterly mean concentration of ozone and NO2 with the quarterly ADR. However, in most of the cases a positive correlation coefficient was observed between the quarterly mean concentration of PM2.5 and the quarterly ADR, indicating a probable association between ambient air pollution exposure and asthma prevalence. 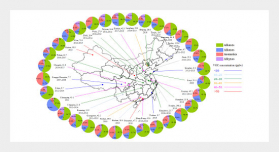