The characteristics of the volatilization of semi-volatile inorganic ions sampled on a Teflon filter were investigated using a backup nylon filter and annular denuders. The volatilization ratio (VR) was defined as the fraction of the concentration at the backup filter and denuder to the sum of the concentrations collected at the Teflon filter, backup filter, and denuder. Particles whose aerodynamic diameters are less than or equal to 2.5 µm (PM2.5) were sampled for 24 h each season from summer 2011 to spring 2012 at a site, about 35 km southeast of downtown Seoul. Increase in VR with increasing temperature was evident, but the effects of relative humidity were not clear, because seasonal variation in the two variables was correlated, and the variation in relative humidity was smaller than that in temperature. While VRs generally decreased with the amounts sampled on the Teflon filter, details of the volatilization behaviors varied among ions according to concentrations at the Teflon filter and VR. The removal of gaseous species at the upstream denuders affected VRs of semi-volatile ions by shifting the equilibrium among NH4+, NO3–, and SO42–. 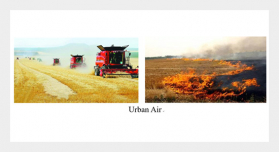