In this study, aerosols spatial, seasonal and temporal variations over Sindh, Pakistan were analyzed which can lead to variations in the microphysics of clouds as well. All cloud optical properties were analyzed using Moderate Resolution Imaging Spectroradiometer (MODIS) data for 12 years from 2001 to 2013. We also monitored origin and movements of air masses that bring aerosol particles and may be considered as the natural source of aerosol particles in the region. For this purpose, the Hybrid Single Particle Lagrangian Integrated Trajectory (HYSPLIT) model was used to make trajectories of these air masses from their sources. Aerosol optical depth (AOD) high values were observed in summer during the monsoon period (June–August). The highest AOD values in July were recorded ranges from 0.41 to 1.46. In addition, low AOD values were found in winter season (December–February) particularly in December, ranges from 0.16 to 0.69. We then analyzed the relationship between AOD and Ångström exponent that is a good indicator of the size of an aerosol particle. We further described the relationships of AOD and four cloud parameters, namely water vapor (WV), cloud fraction (CF), cloud top temperature (CTT) and cloud top pressure (CTP) by producing regional correlation maps of their data values. The analyses showed negative correlation between AOD and Ångström exponent especially in central and western Sindh. The correlation between AOD and WV was throughout positive with high correlation values > 0.74 in whole Sindh except eastern most arid strip of the Thar Desert in the region. The correlation between AOD and CF was positive in southern Sindh and goes to negative in northern Sindh. AOD showed a positive correlation with CTP and CTT in northern Sindh and a negative correlation in southern Sindh. All these correlations were observed to be dependent on the meteorological conditions for all of the ten sites investigated. 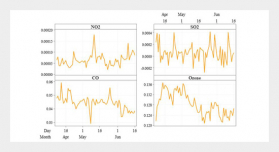 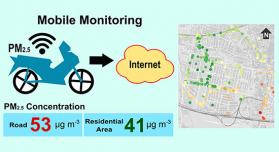