MnOx supported on multi-walled carbon nanotubes (MWCNTs) catalysts were prepared by the pore volume impregnation method and used for low-temperature selective catalytic reduction (SCR) of NO with NH3. Based on the previous study, 10 wt.% loading MnOx/MWCNTs were then selected for investigation of the reaction mechanism by in situ Diffuse Reflectance Infrared Fourier Transform spectroscopy (in-situ DRIFTS). The important intermediates in the SCR of NOx process at 210°C were discussed based on the DRIFTS results. Furthermore, the NH3-SCR reaction pathways over MnOx/MWCNTs catalysts were proposed. The results showed that NH4+ species on Brønsted acid sites and coordinate ammonia species on Lewis acid sites existed during the SCR reaction. NH4+ species was more active than coordinate ammonia species over the catalysts at 210°C. Most of NOx ad-species would react with NH3 ad-species. However, nitrite species, bidentate and monodentate nitrates contributed to the SCR reaction over the catalysts mostly. Two possible reaction pathways were proposed. One was that NOx ad-species could react with NH4+ to form intermediate of NH4N2O4 (a), NH4NO2 (a) or NH4NO3 (a), then to produce N2 and H2O as the final products. The other pathway was that NH3 was initially adsorbed on active site and NH2 was formed, then NH2 reacted with NOx ad-species to produce intermediate NH2NO2 or NH2NO3 which were unstable and would decompose into N2 and H2O. 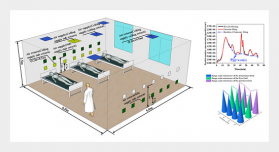