We investigated temporal trends in atmospheric visibility as well as their relationship to non-accident-related daily mortality, the Comprehensive Air-quality Index (CAI) in Korea, and selected meteorological factors in four cities (Seoul, Busan, Daegu, and Ulsan) and one remote island (Ullungdo) for the period 2001–2009. According to the mean values, Seoul exhibited the lowest visibility (12.2 km), followed by Ullungdo (12.6 km), Ulsan (14.2 km), Daegu (14.7 km), and Busan (17.3 km). Conversely, Ullungdo had the lowest CAI value (82.4) and no respiratory mortality (RM) occurrences at all, and Seoul had both the highest mean CAI value (122) and the highest occurrence of daily RM (5.3). There were negative correlations between visibility and two meteorological parameters (relative humidity and ambient temperature) in all five areas, whereas there were generally positive correlations between visibility and the other two meteorological parameters (precipitation and wind speed). For some lag periods, the mortality in the cities was significantly correlated with visibility and the CAI, whereas mortality in Ullungdo was not. Busan had the highest excess risk for non-accident-related daily mortality, followed by Daegu, Seoul, and Ulsan. 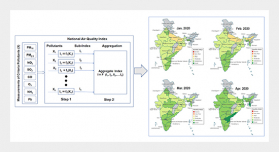