Emission inventories can serve as a basis for air quality management programs. The focus has been mainly on building inventories for criteria pollutants including particulate matter (PM). Control efforts in developing countries are mostly limited to total suspended particles (TSP) and/or PM10. Since the adverse effects of PM10 depend on its chemical composition, it is important to control emissions of toxic species. The first step is to identify key pollution sources and estimate quantities of various chemical species in emissions. This paper presents a speciated PM10 emission inventory for Delhi, the capital and one of the most polluted cities in India. An established PM10 inventory for Delhi in conjunction with source profiles was used to estimate emissions of major PM10 components including organic and elemental carbon (OC and EC, respectively), sulphates (SO42–), and nitrates (NO3–), as well as selected toxic trace metals (i.e., Pb, Ni, V, As, and Hg), some of which are subject to India’s National Ambient Air Quality Standards (NAAQS). For the base year of 2007, emission estimates for PM10 mass, OC, EC, SO42–, and NO3– are 140, 22, 6.4, 2.8, and 2.1 tonnes/day (TPD; 1 tonne = 1000 kg), respectively. Emissions of Pb, Ni, V, As, and Hg are estimated to be 203, 43, 37, 26, and 9.4 kg/day, respectively. This inventory underestimated Pb and Hg emissions because sources of PM10 from unorganized secondary lead smelters are not specifically identified and gas-to-particle conversion of Hg is not accounted for. 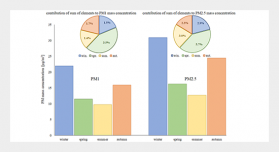