The new portable microAeth® AE51 (AE51) is very useful for assessing occupational and environmental exposure to black carbon (BC) aerosols in epidemiological research. However, information about the performance of AE51 is limited. This study compares AE51 with the widely used, rack-mounted Aethalometer® AE31 (AE31) by evaluating the real-time performance of these two instruments, as carried out at a traffic site. Additionally, an optimized noise-reduction averaging (ONA) algorithm is adopted to eliminate the negative values in the BC data sets. Negative BC levels may be present using AE51 at low actual BC levels or at a high time-resolution. The negative values can be eliminated very effectively by the ONA method. The time-variation of the 5 min BC levels measured using AE51 is highly consistent with that measured using AE31. Loading effects on the measured BC levels are observed during the sampling period. Additionally, the correcting factor, k, is evaluated, in which the correcting factors are 0.0033 and 0.0039 for AE31 and AE51, respectively, when used to monitor the BC levels at this traffic site. The analytical results indicate that the BC levels are underestimated by up to 15% when the ATN-ATN0 increases to ~40. The measurement results also reveal that the BC levels measured by AE51 are approximately 14% higher than those measured using AE31. These results may be due to the different aerosol deposition velocities and mass attenuation cross-section parameters (σATN) of the two instruments. 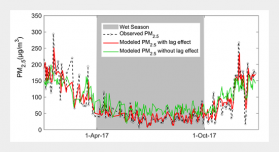