An air quality monitoring network consisting of 53 stations at 9 cities over the Yangtze River Delta (YRD) simultaneously measured gaseous and particulate pollutants (SO2, NO2, CO, O3, PM2.5 and PM10) during the six-month Shanghai World Expo in 2010. The regional distribution of air pollutants showed that Shanghai was a low-SO2-PM10 zone over the YRD during the Expo, owing to the effective controls that were applied to power plants, industrial activities and construction works. However, Shanghai also became a high-NOx-CO-O3 zone in the YRD, partly due to the large number of vehicles in Shanghai, and also the expected increase in transportation emissions due to the tremendous number of visitors during the Expo. Monthly variations in the major pollutants generally presented similar patterns, with lower values in the middle of the Expo, i.e., from July to September, and higher values in May, June and October. The magnitudes of pollutant precursor (SO2 and NO2) concentrations and meteorological conditions (e.g., wind speed, directional wind from X vector, and mixing layer height) were investigated, and found to play important roles in the monthly variations. Spatial correlations of air pollutants between Shanghai and the other 8 cities revealed the impact of regional transport on air quality in Shanghai, and vice versa. Intense air pollution episodes in Shanghai were mainly related to the regional/long-range transport from inland polluted regions. The high frequency of marine winds during the Expo had a positive effect on the air quality of coastal cities, while it had a negative effect on some inland cities in the YRD. 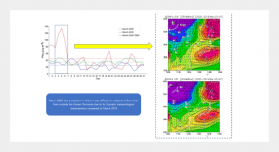